Who is Brad Pitt?

Brad Pitt was born William Bradley Pitt to strict Baptists William A. Pitt and Jane Etta Hillhouse. The eldest of three children, Pitt has a brother, Doug (b. 1966) and a sister, Julie (b. 1969).
Soon after his birth, the family moved to Springfield, Missouri, where his father ran a trucking company. He attended Kickapoo High School where he joined the tennis, golf and swimming teams, and was a member of the choir, the forensics club, the debating club and the student council. Following his graduation from school in 1982, Pitt attended the University of Missouri, majoring in Journalism and Advertising. He dropped out with only two credits left to gain his degree, and set off for California to pursue his dream of a Hollywood acting career.

Whilst taking acting lessons, Pitt did part-time work including being a furniture mover, a chauffeur and a costume-wearing mascot for a restaurant chain. Finally, in the late 1980s, he started getting some television work, which included appearing in ‘Dallas’, ’21 Jump Street’, ‘Growing Pains’, ‘Thirtysomething’, ‘Freddy’s Nightmares’, ‘Another World’, and ‘Head of Class’. Pitt’s debut on the big screen was in an uncredited part as a waiter in ‘No Man's Land’ (1987). A number of small roles followed before he landed a starring role in the crime drama made-for-television movie ‘Too Young to Die?’ (1990), co-starring Juliette Lewis.

Pitt finally gained notice in Ridley Scott’s ‘Thelma & Louise’ (1991), starring Susan Sarandon, Geena Davis and Harvey Keitel. His role as scruffy layabout J.D., despite being a small one involving a mere fourteen minutes of screen time, was his big break. He played the memorable role of Paul Maclean in Robert Redford’s ‘A River Runs Through It’ (1992), a true story set in Montana and based on the novel by Norman Maclean. He was Floyd in ‘True Romance’ (1993), the thriller written by Quentin Tarantino, starring Patricia Arquette, Christian Slater and Val Kilmer. ‘Interview with the Vampire: The Vampire Chronicles’ (1994) starred Pitt as the unforgettable Louis de Pointe du Lac opposite Tom Cruise in the horror/fantasy that won him two 1995 MTV Movie Awards, for Best Male Performance and Most Desirable Male. He was also nominated for Best Actor by the Academy of Science Fiction, Fantasy & Horror Films, and for Best On-Screen Duo in the 1995 MTV Movie Awards.

Having certainly proved his capabilities as an actor, as well as his box office 'bank-ability', Pitt continued to give outstanding performances in his next three movies. He was cast as the wild and winsome Tristan Ludlow in ‘Legends of the Fall’ (1994), an epic tale of three brothers and their father, with Anthony Hopkins, Aidan Quinn and Julia Ormond. For this role, he received a 1995 Golden Globes award nomination for Best Performance by an Actor in a Motion Picture. In ‘Se7en’ (1995), the graphic thriller about a twisted serial killer using the seven deadly sins as his modus operandi, Pitt played Detective David Mills and won the 1996 MTV Movie Award for Most Desirable Male and was nominated for the 1996 MTV Movie Awards Best On-Screen Duo. He then received an Oscar nomination for Best Actor in a Supporting Role, playing Jeffrey Goines in ‘Twelve Monkeys’ (1995) starring Bruce Willis and Jon Seda, and won a number of awards for Best Supporting Actor.

The following year, he played Michael Sullivan in ‘Sleepers’ (1996), a story about four boys growing up in Hell’s Kitchen, New York, based on the book by Lorenzo Carcaterra. ‘The Devil’s Own’ (1997) with Harrison Ford was next and then Pitt’s pet project, ‘Seven Years in Tibet’ (1997). It was the true story of Heinrich Harrer, an Austrian mountain climber who befriended the Dalai Lama at the time of China’s takeover of Tibet. Pitt won the 1998 Rembrandt Award for Best Actor but had to deal with much controversy surrounding the film. The Chinese government did not approve of the portrayal of Chinese military officers and the Dalai Lama, and strongly discouraged both the production and the release of the film. As a result, both Pitt and his co-star David Thewlis were banned from ever entering China.

Pitt has always had a weakness for his leading ladies and has always been a dogged by the tabloids. His hatred of the paparazzi is well known and he will go to extreme lengths to protect his privacy. In the past, he was romantically linked to Julia Ormonde, Robin Givens, Geena Davis, Shalene McCall, Shirley Walsh and Alice Wilkinson. Pitt was with Juliette Lewis, his co-star in ‘Too Young to Die?’ (1990), for three years and enjoyed a long-term relationship with ‘Se7en’ (1995) co-star Gwyneth Paltrow. They were engaged in December 1996, but split up in June 1997.

On 29 July 2000, Pitt married ‘Friends’ star Jennifer Aniston in a fabulous cliff-top ceremony in Malibu. They became Hollywood’s ‘Golden Couple’ and together with Paramount Pictures head Brad Grey, set up Plan B Entertainment, a production company that produced Tim Burton’s ‘Charlie and the Chocolate Factory’ (2005) starring Johnny Depp as Willy Wonka. However, Pitt became the sole owner of the company in 2006 and after four and a half years of marriage, he walked out on Aniston, never once looking back, much to her dismay.

Pitt starred in ‘Mr & Mrs Smith’ (2005) with Angelina Jolie and photographs began appearing in the media of the two of them looking remarkably romantic. They were seen together on holiday in Kenya, Britain and France, fuelling media speculation that they were a couple. On 7 January 2005, Pitt and Aniston announced their split after what they said was “much thoughtful consideration”, saying in a joint statement: “We happily remain committed and caring friends with great love and admiration for one another”. Aniston filed for divorce on 25 March 2005 and it was finalised on 2 October 2005.

In an insensitive photo shoot for W magazine, Pitt and Jolie posed as a happy 1960s couple with a brood of children for the July 2005 edition. Following his divorce, Pitt started dating Jolie and the couple were dubbed “Brangelina” by the media. Pitt readily took on the role of ‘dad’ to Jolie’s two adopted children, son Maddox (from Cambodia) and daughter Zahara (from Ethiopia). In December 2005, they finally announced to the world that they were a couple and that Pitt wanted to adopt her children, legally changing their surname to Jolie-Pitt. On 27 May 2006, Jolie gave birth to their daughter, Shiloh Nouvel, in Swakopmund, Namibia, by caesarean section. Pitt was present at the birth and cut the umbilical cord, a very proud moment for him.

Somewhat of a humanitarian, Pitt actively supports AIDS research and global environmental issues. Showing his solidarity for the fight against world poverty, he was a presenter at the July 2005 Live8 benefit concert in London’s Hyde Park. He is a spokesman for the ONE campaign in the US, part of the international Make Poverty History movement, and travelled to Turkey in 2001 to entertain the American troops. Pitt was also involved in the reconstruction of New Orleans after the Katrina hurricane disaster. He voiced his support for same-sex marriages in the October 2006 issue of Esquire magazine. Interested in architecture, Pitt has studied Computer Aided Design and been involved in various design projects on his own homes.

Pitt’s versatility was further highlighted in his next two films, ‘The Curious Case of Benjamin Button’ (2008) and ‘Inglourious Basterds’ (2009), which both attracted a host of award nominations, including an Academy Award for Best Actor for the former.

The prolific actor continues to play roles both in front of the camera and behind the scenes as a producer with credits in hits including 2010's ‘Kick Ass’ and ‘Eat Pray Love’.

All videos of Brad Pitt 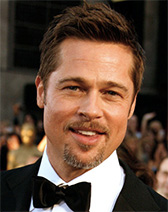