Who is Johnny Depp?

Johnny Depp, born in Kentucky on June 9th 1963 has followed a bizarre road, consequently landing him as one of today's top Hollywood actors. Born John Christopher Depp II, young Depp was originally interested in pursuing a music career. Following a move to Florida, and his parents divorce by age 16, Depp strayed from his peers and siblings and reclused within a life of drugs and alcohol. Teenage Depp dropped out of school to pursue a career in rock and roll music. Over the next few years, Depp fronted numerous garage bands - the most famous entitled The Kids, opened for Iggy Pop. Perhaps more importantly, the success of The Kids furnished Depp with a rising sense of popularity and accomplishment - ironically shot down by Iggy Pop himself during a back-stage confrontation.
Determination and hope for stardom inspired the band to relocate to Los Angeles. Depp married by age 20 to Lori Allison, the band's make-up artist. As his band struggled among the competitive West-coast market, Depp (under suggestion from his wife) decided to try acting. An introduction to Nicolas Cage reluctantly persuaded Depp to audition. Depp's first film debut was in Wes Craven's major motion picture A Nightmare On Elm Street (1984). Unable to regain momentum, The Kids spilt-up soon after the movie's release and Depp diverged from his first love, music, to follow a life of acting. A small role in Platoon (1986) by Oliver Stone followed. Unwilling at first, Fox pursued Depp to star in a new series entitled 21, Jump Street. Although Depp felt this show "beneath him," it actually catapulted his success as an actor and turned him into a teenybopper idol.

His next unanimously appraised piece was Edward Scissorhands (1990) - thought by Depp to downplay his unwanted pretty-boy reputation. The success of this movie established his well known choice for odd and unusual roles - essentially carving a niche for himself as a serious and somewhat dark performer who always surprises audiences with his choice of roles.

His divorce from Lori Allison catalyzed engagements to multiple love interests including Sherilyn Fenn and Jennifer Gray. His decision to take the role in Edward Scissorhands led to the start of a relationship with his then costar Winona Ryder. Depp described her as "the one," despite their break up three years later.

Next came an extraordinary run of movie roles for Depp. Within five years, starting in 1993, Depp starred in an array of movies including: What's Eating Gilbert Grape, Benny and Joon, Arizona Dreaming, Nick of Time, and Jim Jarmusch's Dead Man. It was during this time of stressful success that Depp began to relapse. Again, an unhappy Depp began using drugs and alcohol to escape from reality. Stuck in the depths of disillusion, troubled Depp started an on-off relationship with supermodel Kate Moss (1996); almost simultaneously being arrested twice for both trashing his NY hotel room and fighting a member of the paparazzi (1999). Although his life was in and out of shambles, on screen Depp continued to establish himself as an incredible actor.

In 1998, Depp split with supermodel Kate Moss and started a relationship with French singer Venessa Paradis, relocating to Paris with his two children (Lily-Rose and Jack) in hope to pursue a more normal life. Ironically, the next role he played was perhaps one of the farthest from normal - He was cast as Hunter S. Thompson in Terry Gilliam's Fear and Loathing in Las Vegas. Work opportunities continued and Depp continued acting, starring in such films as: The Source, The 9th Gate (shot in Paris where he met Paradis), Tim Burton's Sleepy Hollow, and the Oscar nominated Chocolat; all the while, Depp managed to continue his musical interests by appearing in an array of music videos (including Tom Petty's "The Great Wide Open"), producing music with his band P, and directing several videos for his wife (2001).

Depp's anti-conformity within Hollywood allowed for his brilliant participation in such roles as: Blow (Depp playing George Jung who helped notorious Pablo Escabar gain entrance into the US cocaine market), and From Hell.

Strangely, Depp disappeared in 2002 after From Hell for unknown reasons. It is speculated that the reason behind the disappearance was due to the collapse of a movie he was working on entitled The Man Who Killed Don Quixote. In 2003, it was announced that this project would be refinanced and in fact debut. When Depp did return to Hollywood, it was with none other than the smash hit pirates-of-the-caribbean (2003) - which made $200 million in only four weeks. Aside from a small part in once-upon-a-time in Mexico, Depp continued to single-handedly capture audiences with Neverland, Secret Window (based on a Steven King story), and The Libertine (2004).

A reunion with Tim Burton will result in two films in 2005. The first is Charlie and the Chocolate Factory to be released July 15, 2005. The second is the Corpse Bride to be released on September 23, 2005. Upcoming projects for Depp include the second and third parts of the Pirates of the Caribbean saga as well as another collaboration with Benecio Del Toro for his directoral debut in The Rum Diary; a movie based upon the works and life of the late Hunter S. Thompson.

To date, Johnny Depp has been nominated twice for an Oscar as well as five Golden Globes; however, he has won nothing but an Honorary Cesar from the French. Although he has recently been rewarded with a star on Hollywood's Walk of Fame, it is discouraging that a man of such a diverse acting magnitude has yet to be credited with the praise and awards that are righteously due. 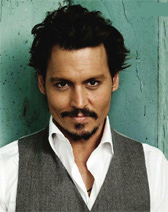