Who is Mackenzie Davis?

The women not only look similar but also stand out for their stubbornness, undeniable talent, and hard work. Unlike the majority of her colleagues, Mackenzie Davis has no Instagram and Twitter pages; she prefers to keep her personal life secret from the general public. The actress’s height is 178 cm., and her weight is 61 kg.).

Mackenzie was born on April 1, 1987, in Vancouver, the west coast of Canada. She was the second and long-awaited child in the family; her parents were a graphic designer and a hairdresser.

When Mackenzie was small, her parents founded a company producing hair products. As the parents were busy with their business, the child was left on her own. Mackenzie got interested in theater performances and joined the school acting club so that she did not have to be alone.

In the course of time, Davis graduated from school and moved to Montreal where she entered the McGill University and chose English and gender studies. As the young woman completed her higher education, she moved to New York to study acting from professionals.

The actress debuted in 2011: she got the small role in the short movie Alex. The next year, Davis was given the secondary role in Smashed.

When Mackenzie studied at the Neighborhood Playhouse School, she met the director Drake Doremus who was fascinated by Davis’s abilities and offered her a role in his new project Breathe In.

The beginning actress’s remarkable talent attracted ordinary people, critics, and agents. Mackenzie started working with her own agent, and her career was developing fast.

In 2013, Davis auditioned for the role in the movie The F Word and succeeded. She played Nicole, the young woman who enters the relationship with the main character’s friend. For this colorful work, Davis was nominated for the Genie Award for Best Supporting Actress.

2014 brought the actress the role of Cameron Howe in Halt and Catch Fire. The young woman was so excited to work with Lee Pace and Scoot McNairy that she could not work: she worried too much and felt nauseous. Four seasons of the series were broadcast; in 2017, the project was closed.

Choosing her characters, Davis did not limit herself. In the next project, the comedy horror Freaks of Nature, Mackenzie transformed herself into the sexy vampire Petra who tried to survive with her friends during the alien occupation.

The space theme continued in Mackenzie’s next movie: she played a NASA worker in The Martian. The association of African and Asian actors severely criticized the director and Davis: the activists believed that an Asian actress, not the Canadian one, should have played Mindy Park.

In the 2016 series Black Mirror, Mackenzie had an ambiguous role in the episode “San Junipero." Her character Yorkie falls in love with her new acquaintance; similar to other storylines, the plot turns out to be less straightforward than the audience could imagine.

The experience of playing a prostitute from the future became valuable for the actress. In Blade Runner 2049, the actress transformed into the young woman Mariette who could change her appearance to comply with her clients’ desires. Starring in the high-grossing blockbuster gave the actress the opportunity to choose projects according to her interests: this is what Mackenzie wanted from the very beginning of her acting career.

The actress said in her interviews she was not seeing anyone. She added she would not mind having a passionate relationship, but her work took too much time. Besides, Davis has not met the person who will not “play games”: Mackenzie claims she wants a clear relationship without complicated flirting and manipulating.

It is highly possible the actress has met the one: in January 2018, during the 75th Golden Globe Awards ceremony, she appeared on the red carpet accompanied by an unknown man. The couple held hands tenderly and spent the whole evening together.

In March 2018, it was announced the next part of Terminator would be released in 2019. Mackenzie will play the female soldier who has a secret mission; Davis’s character is supposed to change Sarah Connor in the story.

In June 2018, the premiere of the comedy drama Tully took place. Davis played the main character, the young nanny who came to Marlo’s house to look after the peculiar family.

In March 2019, the horror The Turning by Floria Sigismondi will come out. In this project, Mackenzie Davis turned into the courageous nanny who had to fight ghosts to save the orphans under her care.

The movie Izzy Gets the F*ck Across Town is another summer 2018 premiere. The director Christian Papierniak created this project in 2017, and the movie was shown in many festivals to appear on the big screen in 2018. This comedy drama tells the story of the young woman Izzy (Mackenzie Davis) who decides to thwart her ex-boyfriend’s wedding.

The majority of news about Davis pertain to work. The woman does not like to visit social events: as she confessed, she felt awkward there. The actress spends her free time with friends; besides, she has a weird hobby: making sculptures of owls’ dead bodies bought via eBay. 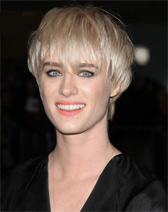