Who is Jamie Foxx?

Jamie Foxx was born to Louise Dixon and Darrell Bishop in Terrell, Texas. Louise abandoned her son seven months after he was born and he was raised by Estelle and Mark Talley, Louise's adoptive parents. They raised the boy with a strict Catholic upbringing and he started to learn the piano at the age of five, eventually playing piano at their local church services.
Jamie Foxx attended Terrell High School, where he played basketball and football, as well as singing in a band called Leather and Lace.

After finishing at high school, Jamie Foxx was offered a scholarship to United States International University, to study classical music and composition. He changed his name when he started performing at stand-up comedy open mic nights, with the surname being a tribute to the comedian Redd Foxx.

In 1991, Jamie Foxx was cast in the comedy sketch show In Living Colour, which then led to a role in the sitcom Roc. Between 1996 and 2001, he had his own sitcom, The Jamie Foxx Show.

Foxx made his film debut in 1992, in the comedy Toys, starring Robin Williams and Michael Gambon. His first dramatic film role did not come until 1999, when he appeared in Oliver Stone's Any Given Sunday, playing an American footballer who liked to party. The film also starred Al Pacino, Dennis Quaid, Cameron Diaz and James Woods.

In 2004, Jamie Foxx played the taxi driver in Michael Mann's critically-acclaimed Collateral, which also starred Tom Cruise and Jada Pinkett Smith. Foxx earned himself a nomination for Best Supporting Actor, for his performance.

The very same year, Jamie Foxx managed to eclipse this success when he starred in Ray, the biopic of the jazz singer Ray Charles. His performance landed him the Best Actor Oscar as well as the BAFTA Award for Best Actor in a Leading Role.

In 2009, Jamie Foxx starred in The Soloist, alongside Robert Downey Jr The film is an adaptation of the true story of a musician who becomes homeless after developing schizophrenia.

Jamie Foxx's outstanding career was recognised by the Hollywood elite in September 2007, when he was awarded with a star on the Hollywood Walk of fame. 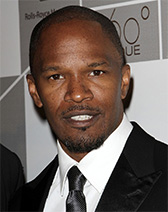