Who is Chris Cooper?

Chris Cooper was born in Kansas City, Missouri and studied Drama at the University of Missouri. Pursuing his acting studies, he moved to New York and was tutored by Stella Adler as well as Wynn Handman at the American Place Theatre. He was directed by Harold Prince in the off-Broadway production of Sweet Bird of Youth.
His television credits are extensive and he is recognized for his work in the mini-series Lonesome Dove and Return to Lonesome Dove. He has also appeared on Law and Order.

Cooper made his film debut in Matewan. Critics hailed his performance, but the film itself was not well received. Later, he appeared in Boys, Lone Justice, Guilty by Suspicion, Money Train and A Thousand Pieces of Gold.

Cooper has done several movies with acclaimed filmmaker John Sayles, who directed him in Matewan, a story about the West Virginia Mining War of 1920. Sayles is known for quietly intense treatments of non-Hollywoodish themes, such as a mystery set along the U.S.-Mexican border in Lone Star, which also stars Cooper. (Movie buffs will recognize Sayles for his hauntingly beautiful The Secret of Roan Inish, set on the Irish seacoast.)

Cooper has been working steadily, playing Robert Redford's brother in The Horse Whisperer (1998), Frank in American Beauty (1999), Harry Burwell in The Patriot (2000) and Conklin in The Bourne Identity(2002). His performance in Adaptation won him not only an Oscar and a Golden Globe, but numerous awards from film critics societies all over the world. Showing his almost chameleon-like ability to completely alter his appearance and demeanor for a role, he again won much praise when he next played horse trainer Tom Smith in Seabiscuit (2003).

Cooper lives in Massachusetts with his wife, Marianne Leone and their son, Jesse Cooper. 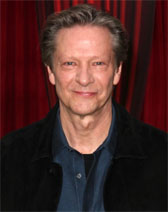