Who is Taylor Swift?

Taylor Alison Swift was born on December 13, 1989, in Reading, Pennsylvania. Swift spent her early years on her family's Christmas tree farm in nearby Wyomissing. Her grandmother had been a professional opera singer, and Swift soon followed in her footsteps. By the age of 10, Swift was singing at a variety of local events, including fairs and contests. She sang "The Star-Spangled Banner" at a Philadelphia 76ers game at the age of 11, and began writing her own songs and learning guitar at 12 years old.
To pursue her music career, Swift often visited Nashville, Tennessee, the country music capital. There she co-wrote songs and tried to land a recording contract. Noting her dedication, Swift and her family moved to nearby Hendersonville, Tennessee, in an attempt to further Swift's career.

Taylor Swift is a ten-time GRAMMY winner, the youngest recipient in history of the music industry’s highest honor, the GRAMMY Award for Album of the Year and she is the only female in the history of The Grammy's to win Album of the Year, twice. Taylor is the only artist in history to have an album hit the 1 million first-week sales figure three times (2010’s Speak Now, 2012’s RED and 2014’s 1989). She’s a household name whose insanely catchy yet deeply personal self-penned songs transcend music genres, and a savvy businesswoman who has built a childhood dream into an empire.

But the numbers don’t tell Taylor's story half as well as she could. After all, it’s the intangibles that elevate Swift into the stratosphere of our pop culture planet, allowing the 25-year old singer-songwriter to orbit in a more rarified air. Her large-scale charitable contributions are one thing, but it’s in the small gestures – the notes of compassion she posts on the Instagram photos of lovelorn fans, the genuine hugs she distributes without discretion – where Swift proves time and time again that platinum-selling, record-setting success has not changed her inherent nature. She is awkwardly honest and powerfully empathetic; a brazen superfan, loyal friend, fierce protector of hearts; and one of the world’s greatest ambassadors for the power of just being yourself.

Granted, for Taylor, “being herself” tends towards shimmering, gossamer perfection – but that’s an image regularly blown whenever she dons fake braces and a tri-pony to clown around on late night TV. She’s the first artist since the Beatles (and the only female artist in history) to log six or more weeks at No. 1 with three consecutive studio albums. And while she’s been named Billboard Magazine’s Woman of the Year (the only artist to receive this nod twice, and their youngest-ever honoree), one of Time Magazine’s 100 Most Influential People in the World, and one of only eight candidates for Time's most prestigious honor, Person of the Year, in 2014, she’s probably the only person on those lists who uses social media to post notes to her best friends and videos of her cats.

In the fall of 2014, when Taylor released her critically acclaimed fifth album, 1989, she astounded the world by selling almost 1.3 million albums in its debut week -- a feat that had been called impossible. She calls 1989 her most cohesive collection of confessionals yet. It is a touchstone: Taylor's songwriting and sonic evolution surprise us more than ever before. Heavily keyboard- and beat-driven, on 1989, the pop sensibilities that have always been the hallmark of Taylor’s music now move front and center. And throughout the album’s release and the record-breaking world tour that followed, she found herself, as always, in the glare of a blinding spotlight -- but if you think that scares her, you haven’t been paying attention. She’s blazing into the next phase of her still-young career, where she’ll continue to dance like no one’s watching, write like she stole our collective diary, and inevitably soar to ever-greater heights. All that’s left to wonder is how many more lives she’ll lift in the process. 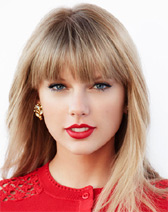