Who is Clive Owen?

Clive Owen made his film debut in the 1988 film Vroom. But it was his work in Croupier, released in the United States in 2000, that attracted Hollywood’s attention. He began to win the lead role in a number of films. Critics and audiences alike were dazzled by Owen’s performance in the 2004 film Closer. In 2005 he was in Sin City, and in 2006 he starred in the Spike Lee film Inside Man.

Clive Owen. Born on October 3, 1964, in Coventry, England. Raised by his mother and stepfather, Owen first took the stage in a school musical at the age of 12. He went on to study at the prestigious Royal Academy of Dramatic Art in London. Owen performed at the Young Vic, a theater in London, in a number of productions, including several Shakespearean plays.

Owen made his film debut in the 1988 film Vroom. He also found work on television with a role on the British series, Chancer, and American telefilms Class of ’61 and Return of the Native in the early 1990s. But it was his work in Croupier that attracted Hollywood’s attention. Owen played Jack Manfred, a writer who works in a London casino, hoping to turn his experiences into a book and gets more than he bargained for. Released in the United States in 2000, the film became a smash at art-house movie theaters across the country.

The next year American audiences saw Owen on the screen in Robert Altman’s Gosford Park. Around this time, he also appeared in a series of short films by such film directors as Ang Lee, John Woo, and John Frankenheimer, which served as commercials for BMW cars. Owen became known for playing cool, steely characters who could be quite lethal. In The Bourne Identity (2002), he played a hired killer called the Professor. At one time, rumors circulated that Owen was a possible replacement for Pierce Brosnan in the role of superspy James Bond in the Bond film series. The part eventually went to actor Daniel Craig.

Owen began to win the lead role in a number of films, including as the legendary title character in King Arthur (2004). While the film was not a success, Owen scored a critical success with another film from that year. Critics and audiences alike were dazzled by Owen’s performance in the 2004 film Closer. The dark drama explored sexual jealousy among its four main characters: Larry, Dan, Alice, and Anna. Owen won a Golden Globe Award and received an Academy Award nomination for his explosive portrayal of Larry, a doctor, who driven by anger to reveal some of his dark, primal nature. The film is an adaptation of a play by Patrick Marber and Owen played more innocent-seeming character of Dan, the obituary writer, in the London stage.

In 2005, Owen appeared in another film adaptation. This time he played a private detective in the dark, violent Sin City, which is based on the graphic novel series by Frank Miller. That same year, Owen also starred in Derailed with Jennifer Aniston. In 2006, Owen starred in the Spike Lee film, Inside Man, as a calm, intelligent bank robber who helps expose a banker's dark past.

More Recent Work The next year, Owen appeared in the action film Shoot 'Em Up and the historical drama Elizabeth: The Golden Age. Most recently, Owen is involved in several film projects including The International, Duplicity, The Boys Are Back in Town, and Journey of Death. Owen is also reportedly working on a sequel to Sin City, which is slated to hit theaters in 2010.

Owen is married to actress Sarah-Jane Fenton. The couple has two daughters, Hannah and Eve. 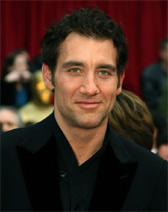