Who is Julia Roberts?

She was born to Walter Grady Roberts and Betty Lou Bredemus on 28th October, 1967 in Smyrna, Georgia. She has two siblings Eric Roberts and Lisa Roberts Gillan and a step-sister Nancy Motes.
Her parents separated in 1972, and thereafter she lived with her mother, and received education from institutions such as ‘Fitzhugh Lee Elementary School’, ‘Griffin Middle School’ and ‘Campbell High School’.

After completing her schooling, she enrolled at the ‘Georgia State University’ but dropped out of studies in order to embark on acting career. She travelled to New York where she joined acting classes and at the same time, worked as a model with the ‘Click Modelling Agency’.

In 1987, she made a television appearance in the drama ‘Crime Story’ and the episode in which she appeared was named ‘The Survivor’.

In 1988, she made her debut in big screen with the movie ‘Satisfaction’. The same year, she acted in the movie ‘Mystic Pizza’ in which her acting was critically acclaimed.

She also appeared in the television crime drama series ‘Miami Vice’ in the year 1988. The following year, she had a two-dialogue appearance in the film ‘Blood Red’.

In 1989, she starred in the film ‘Steel Magnolias’ in a supporting role and this role earned her the ‘Golden Globe Award’ as well an ‘Academy Award’ nomination.

Her breakthrough movie was ‘Pretty Woman’ released in the year 1990. She played the lead in this movie and her acting was well acclaimed. Her next releases in the 90s include films such as ‘Flatliners’, ‘Sleeping with the Enemy’, ‘Hook’, ‘Dying Young’, ‘The Player’, ‘The Pelican Brief’, ‘I Love Trouble’, ‘Prêt-à-Porter’, ‘Something to Talk About’, ‘Michael Collins’, ‘Michael Collins’, ‘Mary Reilly’, ‘My Best Friend's Wedding’, ‘Stepmom’, ‘Notting Hill’,’Conspiracy Theory’ and ‘Runaway Bride’.

During the same period, she also appeared on television in shows such as ‘Friends (Season 2)’ and ‘Sesame Street’.

From 2001 to 2005, she worked in movies such as ‘Erin Brockovich’, ‘America's Sweethearts’, ‘The Mexican’, ‘Ocean's Eleven’, ‘Mona Lisa Smile’, ‘Closer’, ‘Grand Champion’, Full Frontal’, Confessions of a Dangerous Mind’ and ‘Ocean's Twelve’. She appeared in the music video of the song ‘Dreamgirl’ by ‘Dave Matthews Band’, in 2005.

In 2006, she worked in two animated movies ‘The Ant Bully’ and Charlotte’s Web’ as a voice-over artist. The same year, she also made her first appearance in Broadway with the play ‘Three Days of Rain’. The following year, she acted in the movie ‘Charlie Wilson's War’.

She appeared in the films 'Fireflies in the Garden' and 'Kit Kittredge: An American Girl' which were released in 2008. The following year, she played the lead along with actor Clive Owen in the film 'Duplicity'.

In 2010, her film projects include the romantic comedy movies ‘Valentine's Day’ and ‘Eat Pray Love’. The following year, she starred opposite actor Tom Hanks in the romantic comedy film ‘Larry Tomatoes’. She also acted in the movies ‘Jesus Henry Christ’, ‘Love, Wedding, Marriage’ in the same year.

In 2012, she played a negative role in the comedy fantasy film ‘Mirror Mirror’ which is the film adaptation of the German fairy tale ‘Snow White’. Roberts played the Evil Queen in the film.

The following year, she worked in the film ‘August: Osage County’ and her performance in this film earned her nominations of many grand awards such as ‘Academy Award’, ‘Golden Globe Awards’, ‘Critics' Choice Award’ and ‘Screen Actors Guild Award’.

Her most recent projects were her appearance in the second season of the documentary series ‘Makers: Women Who Make America’ in 2014, where she portrays ‘Women in Hollywood’. She has also featured in the ‘Givenchy’ brands spring/summer campaign of 2015. Her upcoming movies are ‘The Secret in Their Eyes’ and ‘Money Monster’. 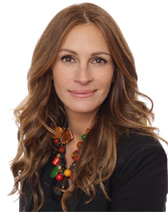