Who is Jim Carrey?

Carrey's life wasn't always a barrel of laughs; he was born on January 17, 1962, into a peripatetic household that regularly ran the gamut from middle-class comfort to abject poverty. Not surprisingly, Carrey became a classic overachiever, excelling in academics while keeping his classmates in stitches with his wild improvisations and elastic facial expressions. His comedy club debut at age 16 was a dismal failure, but Carrey had already resolved not to be beaten down by life's disappointments (as his father, a frustrated musician, had been). By age 22, he was making a good living as a standup comic, and was starring on the short-lived sitcom The Duck Factory -- a series which curiously did little to take advantage of its star's uncanny physical dexterity.
Throughout the 1980s, Carrey appeared in supporting roles in such films as Peggy Sue Got Married (1986) and Earth Girls are Easy (1990). Full television stardom came Carrey's way in 1990 as the resident "white guy" on Keenan Ivory Wayans' Fox TV comedy In Living Color. The most popular of the comedian's many characterizations on the program was the grotesquely disfigured Fire Marshal Bill, whose dubious safety tips brought down the wrath of real-life fire prevention groups -- and also earned Carrey the ultimate accolade of being imitated by other comics. 1994 proved to be "The Year of Carrey," with the release of three top-grossing comedy films to his credit: Ace Ventura: Pet Detective, The Mask, and Dumb and Dumber. By the end of the year, Carrey was commanding seven to ten million dollars per picture. In 1995, the actor/comedian took over for Robin Williams as The Riddler in the blockbuster film Batman Forever, and, in 1996, he tried his hand at a darker and more menacing role as a maniacal cable repairman in The Cable Guy. The film, and Carrey's at-times frightening performance, received decidedly mixed reviews from critics and audiences. Despite the generally negative response to the film, Carrey still retained an interest in branching out into more dramatic roles.

Following a return to all-out comedy in Liar, Liar (1997) as a chronically dishonest attorney, Carrey explored new territory with his lead role in the highly acclaimed The Truman Show (1998), Peter Weir's eerie comedy drama about the perils of all-consuming media manipulation. Critical respect in hand, Carrey returned to comedy of a different sort with the lead role in Milos Forman's Man on the Moon (1999), a much-anticipated biopic of the legendary comic Andy Kaufman. Although the film boasted a powerhouse performance from Carrey, it earned less than stellar reviews and did poor business at the box office. Such was the strength of the actor's portrayal, however, that his exclusion from the Best Actor nominations at that year's Academy Awards was a source of protest for a number of industry members. Carrey returned to straight comedy the following year with the Farrelly brothers' Me, Myself & Irene, in which he starred as a cop with a split personality, both of whom are in love with the same woman (Renée Zellweger). Though that film fared the least successful of the Farrellys' efforts to that point, Carrey's anarchic persona was given seemingly free range and the result was his most unhinged role since The Mask. That same year, he assumed the lead role in Ron Howard's Dr. Seuss's How the Grinch Stole Christmas, raking in the money at the box-office and receiving a Golden Globe nomination despite widespread critical-contempt for the film. Continuing to seek acceptance as a skilled dramatist, Carrey next appeared in the 2001 box-office bomb The Majestic.

Undeterred by the failure of The Majestic, Carrey returned again to both comedy and box-office success with 2003's Bruce Almighty. After handily proving that his power as a big-screen star was very much intact, Carrey wasted no time switching gears once again as he embarked on his most ambitious project to date, the 2004 mind-bending romantic-dramedy Eternal Sunshine of the Spotless Mind. Scripted by Charlie Kaufman and directed by Michel Gondry, the film garnered rave reviews and featured what was arguably Carrey's most subtly complex and subdued performance to date.

Carrey's cartooney presence on screen would make him a natural fit for the kids' movie Lemony Snicket's A Series of Unfortunate Events in 2004, as well as other family films over the coming years like A Christmas Carol and Mr. Popper's Penguins. The actor would continue to explore dramatic roles, however, such as the dark thriller The Number 23 and the critically acclaimed I Love You, Phillip Morris.

All videos of Jim Carrey 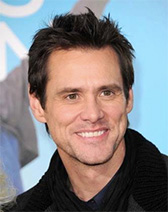