Who is Justin Bieber?

Justin Bieber is a Canadian pop-R&B singer. He was born on March 1, 1994 in London, Ontario and was raised in Stratford, Ontario, CANADA.
Justin Bieber’s mother, Pattie Mallette, was 18 years old when she became pregnant with her son. Mallette, who worked a series of low-paying office jobs, raised Justin Bieber as a single mother in low-income housing. However, Justin Bieber maintains contact with his father, Jeremy Bieber, who married another woman and had two children.

Justin Bieber’s paternal great-grandfather was a German immigrant to Canada.

During his childhood, Justin Bieber was interested in hockey, soccer, and chess; he often kept his musical aspirations to himself. As he grew, Bieber taught himself to play the piano, drums, guitar, and trumpet.

In early 2007, when he was 12, Justin Bieber sang Ne-Yo’s “So Sick” for a local singing competition in Stratford and placed second. Mallette posted a video of the performance on YouTube for their family and friends to see. She continued to upload videos of Bieber singing covers of various R&B songs, and Justin Bieber’s popularity on Youtube grew.

In 2008, Justin Bieber was discovered by Scooter Braun, who happened to come across Bieber’s videos on YouTube and later became his manager. Braun arranged for him to meet with Usher in Atlanta, Georgia, and Bieber was soon signed to Raymond Braun Media Group (RBMG), a joint venture between Braun and Usher, and then to a recording contract with Island Records offered by L.A. Reid.

His debut single, “One Time”, released worldwide in 2009, charted in the top 30 in over ten countries. His debut release, My World, followed on November 17, 2009, and was eventually certified platinum in the United States. Justin Bieber became the first artist to have seven songs from a debut album chart on the Billboard Hot 100.

Justin toured with Taylor Swift as her supporting act on two of her U.K. stops for "Fearless" tour. He also embarked on five headlining concerts in Canada. Moreover, he appeared in several hit U.S. TV shows, naming some were "Good Morning America", "The Ellen DeGeneres Show,DeGeneres "The George Lopez Tonight Show" and "Chelsea Lately Show".

In the following year, Bieber dropped "My World 2.0" (released on March 23, 2010) which boasted big hits like "Baby", "Eenie Meenie" and "Somebody to Love". Later in 2011, Bieber released the concert documentary "Never Say Never". The movie, which eventually earned more than $73 million at the box office, also had guest appearances by Kanye West, Miley Cyrus and Bieber's musical mentor Usher. That same year, Bieber released a holiday album called "Under the Mistletoe" which debuted at No. 1 on the Billboard 200 upon its arrival in November.

Around the same time, he started working on his third album which was eventually revealed to be titled "Believe". Its first single "Boyfriend" was released in early 2012 and became his biggest hit at that time as it reached No. 2 on Billboard Hot 100. Its parent album came out in June that year and was followed by a massive tour as well as another concert film titled "Justin Bieber's Believe". While enjoying his success as a teen superstar, he began getting involved in a number of troubles. After being sued by a woman claiming he's the father of her baby, Bieber was accused of spitting on his neighbor in addition to threatening him in March 2013. Two months later, members of Bieber's neighborhood in Calabasas, California complained that he's driving too fast in a residential area.

In January 2014, Bieber's home in California was searched after he was accused of egging a neighbor's house. Days later, he was arrested for suspicion of drag racing and driving under the influence. After a breathalyzer test showed that he wasn't sober, he was taken into custody where he stayed until he posted bail, which was set at $2,500.

In addition to his bad behavior, Bieber often made headlines for his on-again, off-again relationship with Selena Gomez. The pair, who broke up in late 2012 after dating for two years, were frequently spotted together, sparking rumors that they rekindled their relationship.

In 2015, Bieber returned to the music scene when he appeared on Jack U a.k.a. Diplo and Skrillex's "Where Are U Now". The song was a hit, reaching the top 10 of Billboard Hot 100. Later in the year, he previewed his fourth album with "What Do You Mean" which went on to be his biggest hit to date, surpassing 2012's "Boyfriend". It debuted at No. 1 on Hot 100,becoming only the 23rd song in the chart's history to do so. It also shattered Spotify's record which was set by One Direction a few weeks earlier.

Bieber's new album, which he's said will feature songs inspired by ex-girlfriend Selena Gomez, will hit the stores on November 13. 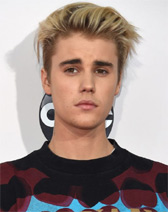