Who is Denzel Washington?

Born on December 28, 1954, to Pentecostal minister Denzel senior and his wife Lynne, a beautician and gospel singer. Growing up in the middle-class Bronx suburb of Mt Vernon, New York, he later described his childhood as "a good background for somebody in my business. My friends were West Indian, blacks, Irish and Italians, so I learned a lot about different cultures".
At the Bronx's Fordham University in the mid-Seventies, he majored in journalism and took acting classes but there was "no great revelation".

While working as a councillor on a YMCA camp during a summer recess, however, Denzel organised a talent contest only to find his audience telling him he was a natural actor.

As soon as college reopened he hit the boards, winning the lead in Othello – a performance which drama professor and former actor Robinson Stone later called "easily the best Othello I have ever seen" and, after graduating in 1977, landed a part in film Wilma.

Fours years later he played Malcolm X for the first time in a stage production of When The Chicken Comes Home To Roost. His first step onto the small screen came in 1982 as Dr Raymond Chandler in the TV series St Elsewhere, a role he played for five years.

Denzel won his first Best Supporting Actor Oscar nomination in 1984, with his portrayal of Steve Biko in the David Attenborough film Cry Freedom. Five years later he took home a statuette for his role as a slave-turned soldier in Glory.

Two more nominations followed in 1993 and 2000. The first was for his big screen portrayal of Malcolm X; the second for yet another biopic, The Hurricane, about the wrongful imprisonment of boxer Rubin Carter.

And in 2002 he was awarded another Oscar. This time it was for Best Actor, recognising his portrayal of a corrupt cop inTraining Day.

Between 2003 and 2004, Washington appeared in a series of thrillers that performed generally well at the box office, including Out of Time, Man on Fire, and The Manchurian Candidate. In 2006, he starred in Inside Man, a Spike Lee-directed bank heist thriller co-starring Jodie Foster and Clive Owen, released in March, and Déjà Vu.

In 2006, Washington worked alongside Irish rock band The Script on a project combining music and Hollywood. The hybrid of genres was critically acclaimed, but didn't receive much mainstream attention because of legal conflicts between The Script's record label and Denzel's studio commitments.

In 2007, Washington co-starred with Russell Crowe, for the second time after 1995's Virtuosity, in Ridley Scott's American Gangster. He also directed and starred in the drama The Great Debaters with Forest Whitaker. He next appeared in Tony Scott's 2009 film The Taking of Pelham 123 (a remake of the 1974 thriller of the same name), where he played New York City subway security chief Walter Garber opposite John Travolta's villain.

Washington is an Independent voter. He supported Barack Obama in 2008.

Washington has been a big fan of the Dallas Cowboys and Los Angeles Lakers since childhood.

The Revolutionary Armed Forces of Colombia named Washington as one of three people (the others being directors Oliver Stone and Michael Moore) with whom they were willing to negotiate for the release of three defense contractors the group had held captive from 2003 to 2008.

On May 18, 1991, Washington was awarded an honorary doctorate from his alma mater, Fordham University, for having "impressively succeeded in exploring the edge of his multifaceted talent". In 2011, he donated $2 million to Fordham for an endowed chair of the theater department, as well as US$250,000 to establish a theater-specific scholarship at the school. He also received an honorary Doctorate of Humanities from Morehouse College on May 20, 2007. and an honorary Doctor of Arts degree from the University of Pennsylvania on May 16, 2011.

In 2008, Washington visited Israel with a delegation of African-American artists in honor of the state's 60th birthday. 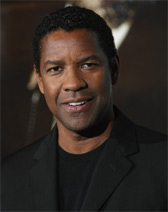