Who is Jackie Chan?

One of the most popular film personalities in the world, Jackie Chan came from a poverty-stricken Hong Kong family
Born April 7, 1954, in Hong Kong, China. When his parents moved to Australia to find new jobs, the seven-year-old Chan was left behind to study at the Chinese Opera Research Institute, a Hong Kong boarding school. For the next 10 years, Chan studied martial arts, drama, acrobatics, and singing, and was subjected to stringent discipline, including corporal punishment for poor performance. He appeared in his first film, the Cantonese feature Big and Little Wong Tin Bar (1962), when he was only eight, and went on to appear in a number of musical films.

In 1971, he rejoined his parents in Australia, but it wasn't long before he returned to Hong Kong, and adopted the stage name Chen Yuan Long. Chan found work as a stunt man and martial arts fighter, with his first film role as an adult in 'Little Tiger from Canton'. His talent soon saw him graduating first to stunt co-ordinator, and then to director, before receiving his first credit as martial arts director for 'The Heroine', in which he also starred.

Billed as Cheng Lung, Chan entered films in his mid-teens, appearing in 25 productions before his 20th birthday. Starting out as a stunt man, Chan was promoted to stardom as the potential successor to the late Bruce Lee. In his earliest starring films, he was cast as a stone-cold serious type, determined to avenge Lee's death. Only when he began playing for laughs did Chan truly attain full celebrity status. Frequently referred to as the Buster Keaton of kung-fu, Chan's outlook on life is a lot more optimistic than Keaton's, but in his tireless devotion to the most elaborate of sight gags and the most awe-inspiring of stunts (many of which have nearly cost him his life), Chan is Keaton incarnate.

From 1978's The Young Master onward, Chan has usually been his own director and screenwriter. His best Hong Kong-produced films include the nonstop action-fests Project A (1983), Police Story (1985), Armour of God (1986), and the Golden Horse Award-winning Crime Story (1993) -- not to mention the multiple sequels of each of the aforementioned titles. Despite his popularity in Europe and Asia, Chan was for many years unable to make a dent in the American market. He tried hard in such films as The Big Brawl (1980) and the first two Cannonball Run flicks, but American filmgoers just weren't buying.

At long last, Chan mined U.S. box-office gold with 1996's Rumble in the Bronx, a film so exhilarating that audiences never noticed those distinctly Canadian mountain ranges looming behind the "Bronx" skyline. Chan remained the most popular Asian actor with the greatest potential to cross over into the profitable English-speaking markets, something he again demonstrated when he co-starred with Chris Tucker in the 1998 box-office hit Rush Hour. In 2000 Chan had another success on his hands with Shanghai Noon, a comedy Western in which he starred as an Imperial Guard dispatched to the American West to rescue the kidnapped daughter (Lucy Liu) of the Chinese Emperor.

He maintained his status as one of the biggest movie stars in the world throughout the next decades in a series of films that include Rush Hour 2, The Tuxedo, Shankghai Knights, The Myth, Rush Hour 3. He enjoyed his biggest U.S. hit in quite some time starring in the 2010 remake of The Karate Kid opposite Jaden Smith.

In 1982, Chan married Lin Feng-jiao (aka Joan Lin), a Taiwanese actress. Their son, singer and actor Jaycee Chan, was born that same year. As a result of an extra-marital affair with Chan, Elaine Ng Yi-Lei bore a daughter in 1999.

All videos of Jackie Chan 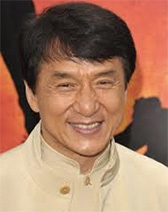