Who is Anthony Hopkins?

He was born Philip Anthony Hopkins in Margam, Port Talbot, on 31 December 1937. His parents, Muriel Anne Yeats and Richard Arthur Hopkins, sent him to Jones' West Monmouth Boys' School in Pontypool, before attending Cowbridge Grammar School.
At the age of 15 Hopkins briefly met Richard Burton, who inspired him to become an actor. He enrolled at the Royal Welsh College of Music & Drama in Cardiff, which he graduated from in 1957. Following two years in the army he moved to London to train at RADA.

Following several years in repertory, Hopkins was spotted by Sir Laurence Olivier in 1965. Olivier invited him to join the Royal National Theatre, where Hopkins became his understudy. Olivier later wrote in his memoir, "A new young actor in the company of exceptional promise named Anthony Hopkins was understudying me and walked away with the part of Edgar like a cat with a mouse between its teeth".

Although he enjoyed limited success at the National, Hopkins yearned to move into film acting. In 1968 he was cast as Richard I in The Lion In Winter, alongside Peter O'Toole, Katharine Hepburn and Timothy Dalton.

Hopkins continued to work in theatre, most notably in a Broadway production of Peter Shaffer's Equus in 1974. However, television and film roles became more frequent; he first appeared on television in the BBC's 1967 version of A Flea In Her Ear.

His style of preparation for roles has been much remarked upon. Rather than rehearsing extensively, Hopkins prefers to memorise his lines - sometimes going over them more than 100 times - allowing him to repeat the words without concentration. The resultant style, although deceptive in its apparent casualness, has become a hallmark of his acting.

In 1996 Hopkins directed his first film, August, an adaptation of Chekhov's Uncle Vanya. He also directed and scored his first written screenplay, an experimental drama called Slipstream, which had its premiere at the 2007 Sundance Film Festival.

Hopkins' most celebrated role was as the cannibalistic serial killer Hannibal Lecter in The Silence Of The Lambs. He won an Academy Award for Best Actor for the role in 1992; the film also won Best Picture, Best Director and Best Adapted Screenplay, and Hopkins' co-star Jodie Foster was awarded Best Actress.

He has reprised the role of Lecter twice, in 2001's hannibal and in the following year's Red Dragon. Hopkins has stated that he is unlikely to appear as the character again.

In addition to his Oscar win for The Silence Of The Lambs, Hopkins was nominated for his part in The Remains Of The Day (1993), Nixon (1995) and Amistad (1997). In 2006 he received the Golden Globe Cecil B DeMille Award for lifetime achievement.

In February 2008 Hopkins became a Fellow of the British Academy of Film and Television Arts (Bafta). He had previously won Bafta awards for his parts in The Silence Of The Lambs, Shadowlands, and the 1973 BBC production of War And Peace.

In 1987 he was made a Commander of the British Empire, and a Knight Bachelor in 1993. In 1996 he received an honorary fellowship from the University of Wales, Lampeter.

Hopkins became a naturalised US citizen in April 2000, a development he celebrated by undertaking a 3,000 mile road trip across the country. He first lived in the country in the 1970s to establish his film career, and returned following his success in The Silence Of The Lambs.

The president of the National Trust's Snowdonia Appeal, Hopkins has helped raise funds for the preservation of the national park. He is also a prominent member of Greenpeace, and a patron of RAPt (Rehabilitation for Addicted Prisoners Trust).

On 23 February 2008, as patron of The Tommy Cooper Society, Hopkins unveiled a commemorative statue in the comedian's home town of Caerphilly. During the ceremony he wore a fez hat and performed a comic routine in tribute to Cooper.

February also saw the release of his film The Wolfman, a remake of the 1941 horror thriller. Hopkins starred opposite Benicio Del Toro and Emily Blunt. Browse a photo gallery of Hopkins in The Wolfman and read an interview with the star.

Future projects are set to include a role in Woody Allen's production You Will Meet A Tall Dark Stranger and taking on the part of Odin in Kenneth Branagh's Thor. Hopkins is also set to play writer Ernest Hemingway in Hemingway & Fuentes, directed by Andy Garcia. 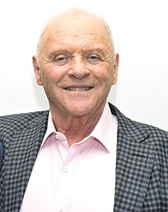