Who is Abbie Cornish?

Abbigale Cornish was born 7th August 1982 in Lochinvar, New South Wales in Australia and grew up on a farm in the Hunter Valley town with her parents, three brothers and younger sister. "I grew up on 170 acres. I remember so much beauty. I'd lie on the trampoline with my brothers and look at the stars all night." Abbie was a self-proclaimed tomboy, albeit one who was "super soft on the inside".
Her older brother liked to chase her across the paddocks in his rally car. She became adept at rolling under the nearest fence. She fell off motorbikes, learned to drive at the age of 12 and became a decent shot with a rifle (not that she ever killed anything!). As a teenager, Abbie would sometimes pose for her keen amateur photographer mother, Shelley, and later on started modelling locally, mainly because she was "bored" and a few of her friends were doing it.

Abbie's first acting job came at the age of 15 on the Australian Broadcasting commission series Childrens Hospital playing a quadriplegic in two scenes. As soon as the cameras started rolling, she experienced an epiphany. "It was like the first time you eat a great lolly," she says. "Or the first time you ride a horse. It's like the heavens have opened up for you." She began making the three-hour train trip to Sydney to attend acting classes at NIDA and the Australian Theatre for Young People. Abbie would move to Newcastle at the age of 16, sharing a warehouse in the city with an artist. "Moving out was quite easy, to tell you the truth," she says. "I was 16 so I was fearless, I didn't worry about anything. If I didn't have money, I just wouldn't eat. If I didn't have money for three days, I just wouldn't eat. By the third day maybe I'd scram some change and get some money for a laksa and that would do me for two days."

Abbie won the role of 'Simone Summers' in Wildside (1997), a gritty Australian police drama series. The show ran for two seasons and was discontinued because apparently it did not sell well overseas. Nevertheless, it received several prestigious awards in its native country and gained name for young Abbie, who won the Young Actor's AFI Award at the Australian Film Institute for her performance. Abbie was featured in a supporting role in the television product Close Contact (1999) and would next be seen as 'Mickey Norris' in Samantha Lang's international production named The Monkey's Mask (2000), in whichs Abbie portrayed a mysterious student who has disappeared.

By the time Cornish was 17, Newcastle had become too small for her and she took off for the US and Europe for six months, during which time she held her solitary 18th birthday celebration in the Italian hills. Abbie now says that those months were some of the best in her life so far.

In 2001 Abbie Cornish played 'Reggie McDowell' in the Australian series Outriders, which ran for 26 episodes, and 'Penne' for the first season of Life Support, a spoof lifestyle program taking a satirical look at Australian society. Abbie stretched her comic muscles as 'Becky Wodinski' in Horseplay (2003) and did guest roles for TV series Water Rats (2000) and White Collar Blue (2003). Cornish received an AFI Award nomination for her work in Marking Time (2003) for the role of 'Tracey' and had a supporting role in One Perfect Day (2004) as a young girl whose life comes to a tragic end after yet another night at an effervescent rave party.

Abbie Cornish was next cast as 'Heidi' in Cate Shortland's Somersault (2004), a beautiful and unique film about a confused teenager who tries to start her life over in a sleepy Aussie town, and her fumbling journey of self-discovery. Abbie won the AFI, IF and FCCA Awards for Best Actress for her stunning performance and made name for herself internationally. She was also seen in the award winning short film Everything Goes next to Hugo Weaving.

2006 saw Abbie Cornish pull off yet another masterful performance in Neil Armfield's Candy, a story of Dan (Heath Ledger), who falls in love with two kinds of Candy - a woman of the same name, and heroin. Abbie portrays the title role. Her 'Candy' is magnetic, mysterious, incredibly multi-layered and very realistic. Cornish was determined to land the role the moment she read the script. She chased the part doggedly for more than two years. "It's so well written," Abbie says. "Each time I read it I need half an hour to get my head together afterwards." Armfield first saw Abbie in Wildside. He was impressed and asked her to read a scene in which Candy has a violent confrontation with her mother. She nailed it and Armfield was pretty sure he had his girl. But it wasn't until Cornish did a screen test with Ledger months later that he knew his two leads made a "fantastic combination". "It's incredible how true she is," Armfield says. "There's such a control of how she releases a character arc through the camera."

Abbie Cornish was next be seen in Ridley Scott's A Good Year (2006) in which she shares most of her scenes with Russell Crowe. The film was widely distributed and raised Abbie's profile internationally. Next she filmed Elizabeth: The Golden Age (2007) in England, the sequal to Elizabeth, which saw her act in a powerhouse cast among Cate Blanchett, Samantha Morton, Clive Owen and Geoffrey Rush. Abbie also filmed Stop-Loss (2008) back-to-back with Golden Age. It is the second full feature from Kimberly Peirce, the director of Boys Don't Cry and saw Abbie star opposite Ryan Phillippe and Channing Tatum. Abbie Cornish was praised for her diversity and screen presence in Elizabeth: The Golden Age and Stop-Loss and both performances also saw her tackle two different accents. While Abbie played supporting roles in both, she received warm reviews and no doubt gained new admirers.

Abbie Cornish's rising star also caught the eye of Jane Campion, who cast her in the role of 'Fanny Brawne' in Bright Star (2009) - the acclaimed director's first full lenght feature in five years, which saw it's world premiere at the 2009 Cannes Film Festival. The drama is based on the three-year romance between 19th century poet John Keats and Fanny Brawne, which was cut short by Keats' untimely death at age 25. Abbie was the first actress to audition for the part and Campion was immediately taken by her talent. "It was very winning. You look back on the audition tape and couldn't watch it without falling in love with her," the director says. Cornish and her co-stars had intense three week rehearsals, followed by nine weeks' of shooting, six-day weeks in London. "There were days I felt really wiped out. But it's what I love about making films, too. It's so consuming. It's everything I see and feel and sense and dream about. Even before we started, I was thinking about Fanny for months. I was seeing her in art galleries and books, and seeing her on the street and in things my mum would say," says Abbie. Bright Star received excellent reviews and Abbie's performance as 'Fanny Brawne' in particular was praised by one critic after another. The New York Times' A.O. Scott commented that Abbie plays her character "with mesmerizing vitality and heart-stopping grace... She's as good as Kate Winslet, which is about as good as it's possible to be." As Keats falls in love with Brawne, the audience falls in love with Abbie Cornish. Indeed, Bright Star arguably marks her best performance to-date.

Next Abbie Cornish tackled a movie completely different from anything she's done before; Sucker Punch (2011) from Watchmen director Zac Snyder. Abbie will play 'Sweetpea' in the all-female action fantasy which is described as "Alice in Wonderland with machine guns." Abbie, Jena Malone and Emily Browning trained for three months for their roles. "It's always fun to try different things and take on new challenges, and this film has definitely been a new experience for me. There's been three months of training, all the martial arts and swords and guns, and on top of that we're dancing and singing. I've absolutely loved it," says Cornish.

During the spring of 2010 Abbie filmed Neil Burger's The Dark Fields, a thriller based on Alan Glynn's novel of the same title. She will portray 'Lindy' opposite Bradley Cooper and Robert De Niro in the film, which will be released in 2011. Next up for Abbie is W.E. (2011), a film written and directed by none other than Madonna. The movie tells parallel tales about Wallis Simpson in the 1930s and a contemporary woman called 'Wally Winthrop' (played by Abbie), who has romantic problems of her own – in addition to the fact that she's obsessed with the Duchess of Windsor's life. Abbie, who is currently involved with Voiceless, is a proud ambassador for animal rights and vegetarianism. "I have always loved animals, always felt a strong connection to all living things," says Abbie, who became a vegetarian as a teenager. "When I was 13, I was introduced to the idea of vegetarianism by a friend of the family over dinner. It felt right for me, and that night I asked mum not to cook any meat for me anymore." When asked to give advice to young people who wish to help animals, Abbie replied: "Educate yourself as much as possible. Take action, for example; buy organic and cruelty free products, avoid fur and leather, get involved with like minded people, inform others of the facts, and if it is right for you - becoming a vegetarian."

For the past six years, Abbie has been trekking, often by herself for months, across Morocco, Brazil, Italy, France and america. She is currently living in Los Angeles. Abbie is passionate about music, she plays guitar and piano, and is learning to squeeze tunes from a piano accordion. She has even often rapped onstage in Newcastle, Melbourne and Sydney with her hip hop group Blades.

Ms. Cornish is an amazingly versatile actress with an unique touch to her characters and a whole lot of charisma! She is a natural beauty and an intelligent woman. Eventhough she is quite new in her profession, she has already several masterful performances on her belt with, no doubt, many more to come. As Candy's producer, Margaret Fink, puts it: "Abbie is going to be a huge star. She has every component you need to to achieve that: beauty, talent, ambition and a respect for the medium."

All videos of Abbie Cornish 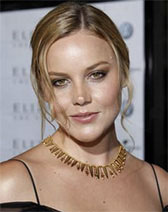