Who is Robin Williams?

Born in Chicago on July 21st, 1951, Williams was raised as an only child and had much time alone with which to develop his imagination, often by memorizing Jonathan Winters' comedy records.
After high school, Williams studied political science at Claremont Men's College, as well as drama at Marin College in California and then at Juilliard. His first real break came when he was cast as a crazy space alien on a fanciful episode of Happy Days. William's portrayal of Mork from Ork delighted audiences and generated so great a response that producer Garry Marshall gave Williams his own sitcom, Mork and Mindy, which ran from 1978 to 1982. The show was a hit and established Williams as one of the most popular comedians (along with Richard Pryor and Billy Crystal) of the '70s and '80s.

Williams made his big screen debut in the title role of Robert Altman's elaborate but financially disastrous comic fantasy Popeye (1980). His next films included the modestly successful The World According to Garp, The Survivors, Moscow on the Hudson, Club Paradise, The Best of Times. Then in 1987, writer-director Barry Levinson drew from both sides of Williams - the manic shtickmeister and the studied Juliard thesp - for Good Morning, Vietnam, in which the comedian-cum-actor portrayed real-life deejay Adrian Cronauer, stationed in Saigon during the late sixties. Levinson shot the film strategically, by encouraging often outrageous, behind-the-mike improvisatory comedy routines for the scenes of Cronauer's broadcasts but evoking more sober dramatizations for Williams's scenes outside of the radio station. Thanks in no small part to this strategy, Williams received a much-deserved Oscar nomination for the role, but lost to Michael Douglas in Wall Street.

Williams subsequently tackled a restrained performance as an introverted scientist trying to help a catatonic Robert De Niro in Awakenings (1990). He also earned accolades for playing an inspirational English teacher in the comedy/drama Dead Poets Society (1989) -- a role that earned him his second Oscar nomination. Williams's tragi-comic portrayal of a mad, homeless man in search of salvation and the Holy Grail in The Fisher King (1991) earned him a third nomination. In 1993, he lent his voice to two popular animated movies, Ferngully: The Last Rain Forest and most notably Aladdin, in which he played a rollicking genie and was allowed to go all out with ad-libs, improvs, and scads of celebrity improvisations.

Further successes came in 1993 with Mrs. Doubtfire, in which he played a recently divorced father who masquerades as a Scottish nanny to be close to his kids. He had another hit in 1995 playing a rather staid homosexual club owner opposite a hilariously fey Nathan Lane in The Birdcage. In 1997, Williams turned in one of his best dramatic performances in Good Will Hunting, a performance for which he was rewarded with an Oscar for Best Supporting Actor.

Williams kept up his dramatic endeavors with both of his 1998 films: the comedy Patch Adams and What Dreams May Come, a vibrantly colored exploration of the afterlife. He next had starring roles in both Bicentennial Man and Jakob the Liar, playing a robot-turned-human in the former and a prisoner of the Warsaw ghetto in the latter. Though it was obvious to all that Williams' waning film career needed an invigorating breath of fresh air, many may not have expected the dark 180-degree turn he attempted in 2002 with roles in Death to Smoochy, Insomnia and One Hour Photo. Catching audiences off-guard with his portrayal of three deeply disturbed and tortured souls, the roles pointed to a new stage in Williams' career in which he would substitute the sap for more sinister motivations.

Absent from the big-screen in 2003, Williams continued his vacation from comedy in 2004, starring in the little-seen thriller The Final Cut and in the David Duchovny-directed melodrama The House of D. After appearing in the comic documentary The Aristocrats and lending his voice to a character in the animated adventure Robots in 2005, he finally returned full-time in 2006 with roles in the vacation laugher RV and the crime comedy Man of the Year. His next project, The Night Listener, was a tense and erosive tale of literary trickery fueled by such serious issues as child abuse and AIDS.

Williams wasn't finished with comedy, however. He lent his voice to the cast of the family feature Happy Feet and Happy Feet 2, played a late night talk show host who accidentally wins a presidential election in Man of the Year, portrayed an enthusiastic minister in License to Wed, and played a statue of Teddy Roosevelt that comes to life in Night at the Museum and its sequel Night at the Museum: Battle of the Smithsonian. He would also enjoy family-friendly comedic turns in World's Greatest Dad, Shrink, and Old Dogs.

In 2013, he returned to television, playing the head of an advertising agency in The Crazy Ones; the show did well in the ratings, but was canceled after only one season. He also played yet another president, Dwight Eisenhower, in Lee Daniel's The Butler. Williams died in 2014 at age 63.

All videos of Robin Williams 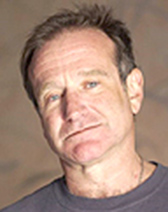