Who is Harrison Ford?

Ford was born in Chicago, to parents Christopher, an Irish-Catholic advertising executive and former actor, and Dorothy, a Russian-Jewish home-maker. He has one brother, Terence. Ford spent an un-noteworthy childhood in suburban Des Plaines and later Park Ridge in Chicago’s north. He became active in the Boy Scouts, attaining their second-highest rank, Life Scout, and worked as a Reptile Study merit badge counsellor at Scout Camps. Bullied at school, no good at sports, and never rising above a C- average, Ford’s schooling at Maine Township High School was only marked by an interest in radio broadcasting where he was the first voice heard on the school radio station.
University at Ripon College in Wisconsin was not much better. Ford disliked the rigid structure and began to show signs of depression, sleeping for days and finding himself unable to face classes. While he did not get a degree, two important things happened: he met Mary Marquardt, who he would marry after leaving college in 1964, and he had his first taste of the theatre acting in productions in his final year. Told by acting-mates he would get acting work in California, Ford and Mary saddled up his old Volkswagen and headed west.

In California, Ford worked and studied at the Laguna Playhouse and, in 1965, signed a $150-a-week contract with a young talent development scheme run by the studio Columbia. The contract saw him only in minor roles - his screen debut was a one-line appearance playing a hotel porter in the James Coburn caper ‘Dead Heat On A Merry-Go-Round’. Despite having no middle name, Ford was credited as Harrison J Ford to distinguish him from the silent movie actor of a few generations back. Moving from Columbia to Universal, after a few years Ford’s roles did not increase and he became despondent. He and Mary had two children, Benjamin and Willard, and bills had to be paid. By chance, Ford turned to carpentry to supplement his income. It would be the best career move he would ever make.

Ford began by promising to make a pair of tables for a friend and despite having no experience as a carpenter, he later got a job building a recording studio for the Brazilian composer Sergio Mendes. Learning from books, Ford did a good job and was recommended to other Hollywood types as “Carpenter to the Stars”, building a deck for Sally Kellerman and working as a stagehand for the rock group The Doors. He continued acting while wood-working on the side and pressures eased. In 1972, Ford scored a minor role in ‘American Graffiti’, a coming of age film staring newcomers Ron Howard and Richard Dreyfuss and directed by fledgling director George Lucas. The film was a huge hit and Ford went on to another small role in the acclaimed thriller ‘The Conversation’, directed by Francis Ford Coppola. Slightly more substantial roles came in ‘Judgement: The Court Martial of Lieutenant William Calley’, the film ‘Dynasty’, and the TV series ‘The Possessed’.

By the late-1970s, Ford still had not cracked the big time and was still working as a carpenter. While building a doorway in a studio one day Ford was spotted by Lucas who was casting for a new film. He asked Ford to come and read with the other potentials and, despite having other actors in mind like Nick Nolte, Kurt Russell and Christopher Walken, Lucas soon realised he had found his man. The film, a sci-fi adventure movie, was 'Star Wars'. It would later go on to become one of the most successful films of all time and Ford’s role as the wise-cracking, loveable-rogue smuggler Han Solo would set him on the path to super-stardom.

The rest of the 1970s was taken up with a small role in Coppola’s ‘Apocalypse Now’, and then roles in the comedy-drama ‘Heroes’, the war film ‘Force Ten From Navarone’, an ‘American Graffiti’ sequel and western-comedy ‘The Frisco Kid’ with Gene Wilder. The stress of location shooting took its toll on Ford’s marriage and he and Mary divorced in 1979, about the same time Ford’s first romantic lead in ‘Hanover Street’ was released.

The 1980s would see the Harrison Ford spaceship blast off. He reprised his role as Han Solo in ‘The Empire Strikes Back’ and then, due to Tom Selleck pulling out because of ‘Magnum PI’ commitments, he starred in another adventure film as the archaeologist ‘Indiana Jones in Raiders of the Lost Ark’. The film’s blend of exotic locations, action (with Ford doing most of the stunts), Nazis, the supernatural, as well as Ford’s comic roguishness, made the film a huge hit.

Harrison Ford became a superstar in his own right, even to the extent that his minor role in Steven Spielberg’s upcoming ‘ET: the Extraterrestrial’ was cut so as not to distract audiences.

In 1983, Ford married the writer of ET, Melissa Mathison. The couple would later have two children, Malcolm and Georgia. Ford’s career kept accelerating with Ridley Scott’s acclaimed sci-fi thriller ‘Blade Runner’ and then back to his franchise mainstays with the third star-wars movie ‘Return of the Jedi’ and then ‘Indiana Jones and the Temple of Doom’.

A turn away from out-and-out adventure saw him Oscar-nominated for the thriller ‘Witness’ and then starring in ‘The Mosquito Coast’ as an eccentric inventor who moves his family, including a young River Phoenix, to Central America. In the mid-1980s, Ford appeared in Roman Polanski’s thriller ‘Frantic’ and then in the comedy ‘Working Girl’ opposite Melanie Griffith and Sigourney Weaver. In 1989, he returned to the indiana-jones series in ‘Indiana Jones and the Last Crusade’ and then went on to the dramas ‘Presumed Innocent’ and ‘Regarding Henry’.

He returned to action in the 1990s with ‘Patriot Games’ and then the massive hit ‘The Fugitive’, in 1993, where he played the wrongly-convicted Dr Richard Kimble on the run from Tommy Lee Jones and trying to clear his name.

Action and comedy films followed through the rest of the 1990s with ‘A Clear and Present Danger’, ‘Sabrina’, ‘The Devil’s Own’ with Brad Pitt, and ‘Air Force One’, where he played the American president taking on terrorists who hijack his presidential jumbo jet. His films dropped off a little in the beginning of the millennium with only moderate hits with the drama ‘Random Hearts’, thriller ‘What Lies Beneath’, and submarine war movie ‘K19: the Widowmaker’. The mid-2000s brought only ‘Hollywood Homicide’ and the thriller ‘Firewall’, neither of which met expectations.

However, Ford returned to the top of his game when he teamed up with director Steven Spielberg and producer George Lucas for ‘Indiana Jones and the Kingdom of the Crystal Skull’, which was a runaway success at the box office. Coming nearly 20 years after the previous Indiana Jones film, the 2008 film starring Shia LaBeouf and Cate Blanchett earned Ford three nominations including a People’s Choice Award for Favourite Male Movie Star and a Saturn Award for Best Actor.

Following the big budget outing Ford settled for a lesser role when he appeared in 2009 independent drama ‘Crossing Over’, which also starred Ray Liotta and Ashley Judd. Sticking with the genre, he went on to join Brendan Fraser in 2010 box office disappointment ‘Extraordinary Measures’, which was panned by critics. The same year saw Ford play a television journalist in ‘Morning Glory’, which received mixed reviews from critics. In 2011 he joined Daniel Craig in the Steven Spielberg and Ron Howard-produced science fiction western ‘Cowboys & Aliens’.

Ford divorced wife Melissa Mathison in 2004 with Mathison receiving $90 million, the biggest divorce pay-out in Hollywood history. Ford was seen dating several Hollywood starlets such as Minnie Driver and Lara Flynn-Boyle before he settled with Ally McBeal’s Calista Flockhart. Ford, who is notoriously private and hates publicity of his personal life, found the media attention around his romance hard to bear. However, they still married in June 2010.

He supports conservation groups and has been instrumental in setting aside large swathes of land at national parks around the world. He sits on the board of Conservation International and, in recognition of his work, he was awarded the Jules Verne Spirit of Nature Award and also has had a spider and an ant species named after him. He is a keen flyer of helicopters and planes and owns several aircraft. He crashed a helicopter in 1999 while on a training run but since then he has been involved in two mountain rescues near his ranch in Wyoming while on duty for Teton County Search and Rescue. 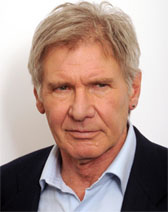