Who is Paris Hilton?

Born in New York on February 17, 1981, Paris is the great grand-daughter of legendary hotelier Conrad Hilton, making her the closest thing America has to royalty. And with homes in Manhattan's Waldorf-Astoria, Beverly Hills and the Hamptons, the blonde bombshell is certainly not afraid to make use of her considerable wealth.
Paris is also proving that, in stark contrast to the charge she is famous only for being famous, she has many strings to her bow. Having made her mark as a catwalk model, she has turned her hand to writing and jewellery design as well as perfume creation. She has even trademarked her famous quip "That's hot!". Underneath the ditsy facade lies a determined businesswoman. "I thought it was cute to play a dumb blonde," she explained in 2005. "On TV, I do it because it's funny. I consider myself a businesswoman and a brand."

It was TV that transformed her from a ubiquitous socialite to a bona fide star. Reality show The Simple Life, in which she and fellow It-girl Nicole Richie traded A-list parties for slopping out pigs and milking cows on a farm, was a huge hit. Indeed American viewers were so gripped by Paris' efforts to prove she didn't mind getting her Jimmy Choos dirty, that several series followed.

The growing fascination with her adventures was confirmed when, in a head-to-head ratings battle, the show beat a live interview with President Bush. A steady stream of seductive photoshoots in publications like Maxim and FHM have also helped buoy her celebrity, while cameo appearances in such films as Zoolander and Raising Helen have likewise played their part.

Another production was somewhat less sophisticated. An explicit home video of a weekend she spent in the Beverly Hills Hotel with former lover Rick Salomon spawned three law suits and a frenzy of media attention in the first half of 2004.

In addition to Rick, she has also dated Backstreet Boys singer Nick Carter and been linked to actors Leonardo DiCaprio and Edward Furlong, as well as boxing champ Oscar de la Hoya. Then, in May 2005, after a courtship of just five months, shipping heir Paris Latsis popped the question.

The engagement was short-lived, however, with Paris calling off the wedding after five months. "I feel I'm just not ready for marriage," she explained. "I have seen the break-ups between people who love each other and rush into getting married too quickly. I don't want to make that mistake." Since the split Paris has enjoyed an on-off relationship with anothing shipping heir - Stavros Niarchos.

In 2004 'Brand Paris' expanded again when she set up her own Heiress records label, leading in August 2006 to the launch of the label's first disc - her eponymously -titled album Paris. The album's first single Stars Are Blind delivered a summertime hit and plenty of airplay for the reality show star. "I have always had a voice and always known I could sing, but I was too shy to let it out," she says. "When I finally let go and did it, I realised it is what I am most talented at and what I love to do the most."

However, controversy followed not long after. In May 2007, after numerous brushes with the law over driving incidents, Paris was sentenced to 45 days in a detention centre. She began her term in June but because of good behaviour was released after just 22 days - and claimed to be a changed woman. "I have a new outlook on life," she declared in an interview with US TV host Larry King. "In a way, I'm really glad this happened, because it changed my life forever," she admitted in another interview, and, revealing she wanted to start to use her fame in a "good" way, she set about dedicating her time to charity work. 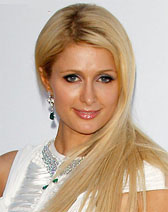