Who is George Clooney?

As the son of broadcast journalist Nick Clooney and the nephew of chanteuse Rosemary Clooney, George Clooney entered the world with show business coursing through his veins. Born May 6, 1961 in Lexington, Kentucky, the future E.R. headliner appeared at the tender age of five on his father's Cincinnati talk program, The Nick Clooney Show. In his youth, Clooney honed a sharp interest in sports - particularly baseball - but by adulthood, Clooney launched himself as an onscreen presence, seemingly without effort. Beginning with a string of television commercials, then signed with Warner Brothers Entertainment as a supporting player. By the time Clooney had paid his dues, he'd appeared in single episodes of The Golden Girls, Riptide, Crazy Like a Fox, Street Hawk and Hunter.
After regular gigs on TV shows like The Facts of Life, Roseanne, and Sisters, Clooney scored a role on the NBC medical drama E.R., which proved his breakthrough to superstardom. When that program shot up to #1 in prime time ratings, Clooney carried it (much more, in fact, than a first-billed Anthony Edwards) - his inborn appeal to women and his onscreen grace and charm massive contributing factors. This appeal increased as his character - initially something of a callous womanizer - matured with the show, eventually evolving into a kind and thoroughly decent, if somewhat hotheaded, human being.

The performer's newfound star power led to big screen opportunities, like an acid-mouthed, rifle-wielding antihero (one of the Gecko Brothers, alongside Quentin Tarantino) in the Robert Rodriguez-directed, Tarantino-scripted horror comedy From Dusk Till Dawn (1995). Not long after, Clooney shifted gears altogether, co-headlining (with Michelle Pfeiffer) in the charming romcom One Fine Day (1996). Though he would notoriously misstep in accepting the role of Bruce Wayne in the 1997 attempted Batman reboot Batman & Robin, Clooney's honesty about the part being a bad fit was refreshing to audiences, and he took little flack for the movie, moving on to critically acclaimed movies like the action-laced crime comedy Out of Sight, and Terrence Malick's adaptation of The Thin Red Line. Out of Sight represented a massive watershed moment for Clooney: the first of his numerous collaborations with director Steven Soderbergh.

In 1999 -- following his much-talked-about departure from E.R. - Clooney continued to work on a number of high-profile projects. He would star alongside Mark Wahlberg and Ice Cube as an American soldier reclaiming Kuwaiti treasure from Saddam Hussein in David O. Russell's Three Kings, and eventually win a 2000 Golden Globe for his portrayal of a pomade-obsessed escaped convict in the Coen brothers' Odyssey update O Brother Where Art Thou?. It was around this time that Clooney, now an established actor equally as comfortable on the big screen as the small, began to branch out as the Executive Producer of such made-for-TV efforts as Killroy (1999) and Fail Safe (2000). Soon producing such features as Rock Star (2001) and Insomnia (2002), Clooney next re-teamed with Soderbergh for a modern take on a classic Rat Pack comedy with Ocean's Eleven (2001). After the dynamic film duo stuck together for yet another remake, the deep-space psychological science-fiction drama Solaris (2002), busy Clooney both produced and appeared in Welcome to Collinwood and Confessions of a Dangerous Mind later the same year.

Confessions marked Clooney's behind-the-camera debut, and one of the most promising actor-turned-director outings in memory. Adapted by Charlie Kaufman from Gong Show host Chuck Barris's possibly fictionalized memoir, the picture exhibited Clooney's triple fascinations with politics, media and celebrity; critics did not respond to it with unanimous enthusiasm, but it did show Clooney's promise as a director. He went on to star alongside Catherine Zeta Jones in the Coen Brothers movie Intolerable Cruelty. The small film was a major sleeper hit among the lucky few who got to see it, and it proved to be a great showcase for Clooney's abilities as a comedian. He moved on to team up with Zeta-Jones again, along with almost the entire cast of Ocean's Eleven, for the sequel, Oceans Twelve, which earned mixed critical reviews, but (like its predecessor) grossed dollar one at the box office.

Clooney next appeared in the harshly explicit and openly critical Syriana. He took the lead in this ensemble political thriller about the oil industry, directed by Stephen Gaghan of Traffic and heralded by critics as a disturbingly real look at a hopelessly flawed and corrupt system. Clooney won an Oscar for Best Supporting Actor for his role as a veteran CIA officer. Never one to rest for very long, Clooney then joined the cast of The Good German. Directed by longtime collaborator Steven Soderbergh, German unfolds in post-WWII Berlin, where Clooney plays a war correspondent who helps an ex-lover (Cate Blanchett) search for her missing husband. The actor-director team would pair up again the following year for the third installment in the Ocean's saga, Ocean's Thirteen. Next turning towards a more intimate, individualized project, Clooney earned yet more acclaim playing the title role in Tony Gilroy's Michael Clayton, where his portrayal of a morally compromised legal "fixer" earned him strong reviews and an Oscar nomination for Best Actor.

Complications during the pre-production of the period comedy Leatherheads led to Clooney rewriting the script, as well as starring in and directing the picture. Though the movie made few ripples with audiences or critics, Clooney's adeptness continued to impress. In 2009, he gave voice to the lead character in Wes Anderson's thoroughly charming stop-motion animation feature Fantastic Mr. Fox, played a soldier with ESP in the comedy The Men Who Stare at Goats, and earned arguably the best notices of his career as corporate hatchet man Ryan Bingham in Jason Reitman's Up in the Air. His work in that well-reviewed comedy/drama earned him nominations from the Screen Actors Guild, the Golden Globes, and the Academy. In the midst of awards season, Clooney again produced a successful telethon, this time to help earthquake victims in Haiti.

In 2011 Clooney would, for the second time in his already impressive career, score Oscar nominations for writing and acting in two different films. His leading role in Alexander Payne's The Descendants earned him a wave of critical praise, as well as Best Actor nods from the Screen Actors Guild and the Academy, as well as capturing the Best Actor award from the Golden Globes. The film he co-wrote and directed that year, the political drama The Ides of March garnered the heartthrob a Best Adapted Screenplay nomination from BAFTA, the Academy, and the Golden Globes.

In 2012 he earned his second Oscar as one of the producers of that year's Best Picture winner, the Ben Affleck-directed political thriller/Hollywood satire Argo. The following year, he appeared in the critically-acclaimed, box office smash Gravity, and also produced August: Osage County. In 2014, he co-wrote and co-produced (with Grant Heslov) and starred in The Monuments Men, but the film was delayed from a late-2013 release and didn't score well with critics or at the box office. 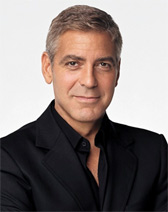