Who is Mark Wahlberg?

Before he started acting, Mark Wahlberg was best known as Marky Mark, the pants-dropping rapper who attained fame and notoriety with his group the Funky Bunch. In the tradition of Will Smith and Ice Cube, Wahlberg has made a successful transition from music to film, garnering particular early praise for his role in Boogie Nights.
Born June 5, 1971, in Dorchester, MA, Wahlberg had a troubled early life. One of nine children, he dropped out of school at 16 (he would later earn his GED) and committed a number of minor felonies. After working various odd jobs, Wahlberg briefly joined brother Donnie and his group New Kids on the Block before forming his own, Marky Mark & the Funky Bunch. The group had widespread popularity for a time, most notably with its 1992 hit single "Good Vibrations." However, it was Wahlberg himself who received the lion's share of attention, whether it was for the homophobia controversy that surrounded him for a time, or for the 1992 Calvin Klein ad campaign featuring him wearing nothing more than his underwear, Kate Moss, and an attitude. In 1993, Wahlberg turned his attentions to acting with a role in The Substitute. The film, co-starring a then-unknown Natasha Gregson Wagner, was a critical and commercial failure, but Wahlberg's next project, 1994's Renaissance Man, with Danny De Vito, gave him the positive notices that would increase with the release of his next film, The Basketball Diaries (1995). Although the film received mixed reviews, many critics praised Wahlberg's performance as Mickey, Leonardo Di Caprio's friend and fellow junkie. Following Diaries, Wahlberg appeared in Fear (1996) in the role of Reese Witherspoon's psychotic boyfriend.

It was with the release of Paul Thomas Anderson's Boogie Nights in 1997 that Wahlberg finally received across-the-board respect for his commanding yet unassuming performance as busboy-turned-porn-star Eddie Adams/Dirk Diggler. The film was nominated for three Oscars and a slew of other awards by associations ranging from the British Academy to the New York Film Critics Circle to MTV. The positive attention landed Wahlberg on a wide range of magazine covers and gave him greater Hollywood pulling power. He had, as they say, arrived. Wahlberg's follow-up to Boogie Nights was 1998's The Big Hit, an action comedy that, particularly in the wake of Boogie Night's acclaim, proved to be a disappointment. This disappointment was hardly lessened by the relative critical and commercial shortcomings of Wahlberg's next film, The Corruptor (1999). An action flick that co-starred Chow Yun-Fat, The Corruptor showcased Wahlberg's familiar macho side and indicated that success in Hollywood is a strange and unpredictable thing. Though he gained positive notice for his role in David O. Russell' s unconventional war film Three Kings the same year, the film was only a moderate success, paving the way for an even more dramatic turn in the downbeat true story of the ill-fated Andrea Gail, The Perfect Storm, in 2000.

The following year found Wahlberg filling some big shoes -- and receiving some hefty criticism as a result -- with his lead role in Tim Burton's much-anticipated remake of Planet of the Apes. Taking over the role that Charlton Heston made famous, Wahlberg found himself pursued onscreen by sinister simians, as well as offscreen by critics who decried the lack of depth that the actor brought to the role. Late that summer, Wahlberg came back down to Earth -- specifically to the everyday-Joe-rises-to-fame territory of Boogie Nights -- with Rock Star, the story of a tribute-band singer who gets a chance to sing for the band he idolizes. Though his noble attempt to fill the considerable shoes of Hollywood legend Cary Grant in the 2002 Charade remake The Truth About Charlie would be only slightly exceeded by his assumption of the role originally played by Michael Caine in the following year's remake of The Italian Job, Wahlberg would subsequently prove that there's nothing like the fresh breeze of an original script in director David O. Russell's existential 2004 comedy I Heart Huckabees. Of course, Wahlberg was never one to let a crowd down, and after riling audiences alongside Tyrese Gibson and André Benjamin in the Detroit-based revenge flick Four Brothers, the athletic actor would take to the gridiron to tell the inspirational story of one football fan whose dreams of playing in the NFL actually came true in the 2006 sports drama Invincible. Also released in the fall of 2006, The Departed allowed Wahlberg to act opposite such heavy hitters as Jack Nicholson, Matt Damon, Alec Baldwin, and his old Basketball Diaries co-star Leonardo Di Caprio under the direction of Martin Scorsese. Not only did Wahlberg hold his own against the cast of critics' darlings, he landed the film's only acting Academy Award nod. In 2007, Wahlberg starred in the suspense actioner The Shooter, as well as in director Peter Jackson's adaptation of The Lovely Bones. Wahlberg starred as the leader of a ragtag group trying to survive amidst murderous plant life in M. Night Shyamalan's so-bad-it's-good The Happening (2008), and played the titular role of Max Payne, which was adapted from a video game of the same name. In 2010 the actor starred in the inspirational docudrama chronicling the life of brothers Micky and Dicky Ecklund as they take on the world of boxing. Wahlberg earned an Academy Award nomination for producing the film; that same year, he began producing a new show for HBO, Boardwalk Empire. Wahlberg had a huge hit in 2012 with Seth MacFarlane's Ted, and joined the Transformer franchise in Transformers: Age of Extinction in 2014. Wahlberg continued his steady work, starring and producing both Deepwater Horizon (which was nominated for two Oscars) and Patriots Day (about the Boston Marathon bombing) in 2016.

As well as many actors of Hollywood, Mark had many romantic relations with his female partners in the movies. For some time the Hollywood movie actor had relations with famous actresses. In the American press, it was reported that among his beloved women were - Jordana Brewster, Reese Witherspoon, and China Chow.

In 2001 Mark got acquainted with the supermodel Rhea Durham who 8 years late became the lawful spouse of the Hollywood film actor. And by this moment they already had three children - two sons Michael and Brendan Joseph and also a daughter Ella Rae. In 2010 one more daughter - Grace Margaret was born at the couple. The family lives in the mansion in the luxurious town of Beverly Hills.

Mark Wahlberg is a devoted admirer of basketball, and "Boston Celtics" remains his favorite team since his childhood. Mark is also fond of cars. The actor could be seen driving his luxury Bentley more than once. The movie star considers this car the best in his motor pool.

Today Mark Wahlberg continues to participate in the shootings of feature films. In 2017 there was released the movie "Transformers: The Last Knight" with the participation of the American actor. For certain, in case of its success, the directors will plan to shoot the sequel to this movie in which Mark will again get the leading role, as earlier he already appeared in the picture "Transformers: Age of Extinction".

Mark constantly monitors his health and physical shape, it is also noted by his fans who are interested in the parameters of the Hollywood star (his growth is 173 cm and he weighs 75 kilos). The actor begins his day at 4 o'clock in the morning when the celebrity goes to the training. The man claims that he always has enough time during the day as he wakes up early. Results can't but please, Mark Wahlberg's photo in the gym already became cult for many people.

The actor doesn't hide his criminal past. Mark claimed more than once that he had made a great number of mistakes and nonsenses in his life. Today the Hollywood movie actor admits that he has revised his behavior long ago and he is also ready to raise his children in the right way so that they won't make the similar evil. 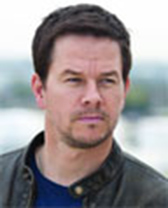