Who is Nicole Kidman?

Nicole Mary Kidman was born June 20, 1967 in Honolulu, Hawaii the first of two daughters, to Anthony and Janelle; Nicole has a younger sister Antonia. Nicole spent the first three years of her life in Washington D.C where her father, a a biochemist and clinical psychologist, pursued his research on breast cancer before returning to their native Sydney, Australia.
As a child Nicole studied ballet, mime and drama. Sprouting to 5'10 the naturally curly auburn haired blue eyed Nicole found herself gawky and didn't have many dates, her first kiss was on stage. At 16 Nicole dropped out of High School to pursue her love of acting and in 1983 appeared in the Australian holiday show Bush Christmas. After her first role, Nicole appeared in more Australian series such as BMXBandits, also in 1983. When Nicole was seventeen she was a singer in a four girl three guy band named Divine Madness,it was also that. In 1986 Nicole appeared in a mini series titled Vietnam in which she portrayed a Vietnam schoolgirl protester and won an Australian Film Institute Award.

After finding an American agent, Nicole appeared in her first film Dead Calm with Sam Neil and Billy Zane in 1989.

Nicole and Tom Cruise in 1991 Nicole didn't become a household name until she appeared in the film Days Of Thunder with Tom Cruise. The film opened in July of 1990 and the couple eventually wed in Telluride,Colorado on December 24, 1990. Nicole then went on to appear in the Australian film Flirting and the film adaptation of the E.L Doctorow novelBilly Bathgate Billy Bathgate in 1991, in Ron Howard's semi-autographical film Far and Awaywith her husband in 1992, the tear jerker My Life with Michael Keaton and the thriller Malice with Malice Alec Baldwin and Bill Pullman. 1993 was a good year for Nicole, it was also the year she became a mother to Isabella Rose whom she adopted as a newborn.

Nicole continued to work steadily dividing her time between being an actress, wife and mother. In 1995 she appeared in the blockbuster film Batman Forever in which she played the newest love in the life of the caped crusader, not to mention his psychiatrist, and the black comedy To Die For in which she portrayed a maniacal weather girl who seduces a teenage boy into killing her husband in her own vain efforts to become famous. "Im so happyto live in a country where life, liberty and all the rest of that still stand for something." was one of the best lines in the film. The film received favorable reviews, especially on Nicole's part showing that she had finally stepped outside the shadow of her famous husband. The same year Nicole and Tom adopted a second child, a baby boy they named Connor Anthony.To Die For

In January 1996 Nicole took home a Golden Globe Award for her role in To Die For and then went on to star in the Henry James adaptation of Portrait Of A Lady directed by Oscar Nominee Jane Champion and costarring John Malcovich.

The next year she starred along side George Clooney in The Peacemaker which dealt with nuclear war Nicole was balancing homelife and her work equally well, making one movie a year while still spending plenty of time with her children and husband. In 1998 she starred with Sandra Bullock in the film Practical Magic in which they played sisters whom just happened to also be witches

Unfortunately Nicole didn't make headlines again until February 2001 where it was made public that she and her husband were separating. Only going from bad to worse Nicole then suffered a miscarriage.

As if life is a series of roller coasters, life picked up again with the June 4, 2001, release of Baz Luhrmanns musical drama comedy Moulin Rouge where she portrayed a singing and dancing prostitute who more then anything wanted to be a real actress. The musical was a roller coaster ride itself, with elaborate dance sequences and musical numbers of every song from "Like A Virgin" to "We Could Be Heroes." The film received very mixed reviews; everything from "EXCELLENT!" to "COMPLETE GARBAGE!" The film slowly became a cult hit and only a few months later her next film The Others about a mother who unknowingly moves her sick children to a haunted house. The film received rave reviews and made over 100 Million dollars in it's box office run. On July 31, 2001 in seven minutes Nicole and Tom's divorce became final (with the "who gets what" to be determined later) but she didn't let heartbreak stop her from touring the world to promote her films.

Nicole and her mother Janelle The off camera Nicole is just as amazing as the people she plays on screen. Nicole and her sister AntoniaBeing a cancer advocate for breast cancer after her mothers battle with it when Nicole was seventeen, Nicole has worked with the UCLA Woman's Reproductive Cancer Program since 1995 and for the past seven years has served as a goodwill ambassador for the United Nations Children's Fund in Australia.

On December 20, 2001 Nicole made Golden Globe history for being nominated for both Moulin Rouge (Best Actress in a Musical Or Comedy) and The Others ( Best Actress in a Drama). With two more films due to be realeased in 2002 and a certain Oscar Nomination in her favor, it looks like Nicole really will survive

All videos of Nicole Kidman 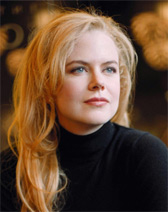