Who is Alec Baldwin?

Equally at home playing leads and character roles, actor Alec Baldwin is known for his work in just about every genre, from action thrillers to comedies to dramas. Born April 3, 1958, in Massapequa, Long Island, he was the second of six children (brothers William, Daniel, and Stephen would also become actors). Baldwin was a political science major at George Washington University before he decided to become an actor; following his change in vocation, he studied drama at NYU and the Lee Strasberg Theatre Institute.
Early in his career, Baldwin was a busy man, simultaneously playing a role on the TV daytime drama The Doctors and performing in Shakespeare's A Midsummer Night's Dream on-stage in the evenings. A few years after making his 1980 Broadway debut, the actor moved to Los Angeles, where he landed a part in the television series Knots Landing. He made his film debut in 1987 with a starring role in Forever, Lulu, which led to work in a number of major films. From 1988 to 1989 alone, Baldwin appeared in no less than seven films, including Tim Burton's black comedy Beetlejuice, Mike Nichols' Working Girl, Jonathan Demme's Married to the Mob, and Oliver Stone's Talk Radio.

In 1990, Baldwin achieved big-budget success playing ace CIA agent Jack Ryan in the undersea thriller The Hunt for Red October. The film's popularity won him acclaim, so Baldwin surprised many by foregoing the opportunity to reprise his role in the sequel Patriot Games (he was replaced by Harrison Ford) in favor of returning to Broadway to star as Stanley Kowalski in A Streetcar Named Desire. Although his decision paid off -- he received a Tony nomination for his performance -- it also marked the point at which Baldwin's star wattage began to flicker. His 1991 film, The Marrying Man proved to be an all-out flop (although it did provide him an introduction to co-star Kim Basinger, whom he would marry in 1993), and the critical success of his next two films, Prelude to a Kiss and Glengarry Glen Ross was overshadowed by a subsequent string of flops, including Malice (1993), The Getaway (1994), and The Juror (1996).

The actor rebounded a bit with his role in Al Pacino's acclaimed documentary Looking for Richard (1996) but then had the unfortunate luck of starring in the 1998 Bruce Willis disaster Mercury Rising. However, the following year proved more fortuitous for Baldwin, as he starred in the coming-of-age comedy Outside Providence, as well as in the crime drama Thick As Thieves and the ethical drama The Confession, appearing alongside Amy Irving and Ben Kingsley. In addition, the actor made an uncredited appearance in Notting Hill, sending up his macho Hollywood persona as Julia Roberts' piggish actor boyfriend.

Baldwin started off the 2000s by re-teaming with David Mamet on the Hollywood satire State and Main as a lecherous leading man with a weakness for underage girls. He provided narration for Wes Anderson's The Royal Tenenbaums, and was one of the few people to escape unscathed from Michael Bay's Pearl Harbor.

Although he continued to make headlines because of his politics, as well as his ongoing legal scuffles with now ex-wife Kim Basinger, Baldwin continued to do strong work in the comedies Along Came Polly (2004) and Fun with Dick and Jane (2005), and scored his first-ever Academy Award nomination for Best Supporting Actor playing a menacing casino manager in 2003's The Cooler. He became a part of Martin Scorsese's stock company playing Juan Trippe in 2004's The Aviator, following it up as a federal agent in love with the Patriot Act in 2006's The Departed.

Baldwin's longstanding association with the venerable sketch comedy show Saturday Night Live (he has hosted over ten times) paid great dividends when he was hired to play the part of the boss on former SNL head writer Tina Fey's fall 2006 sitcom 30 Rock. He earned universal raves for his work on the show, and would earn a Golden Globe nomination every single year of the show's run, winning the award three times. He'd also pick up no less than five Emmy nods, winning that award twice as well. Baldwin was positively beloved on the series, but he would also continue to work in film as well, most notably in the 2009 romcom It's Complicated, which he starred in with Meryl Streep, and the 2012 Woody Allen ensemble film To Rome with Love. 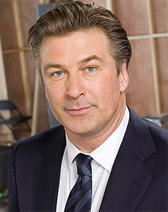