Who is Aidan Quinn?

Born in Chicago on 8 March 1959, Aidan Quinn spent most of the first two decades of his life living on both sides of the Atlantic; his parents - his dad a literature professor, his mum a housewife - had emigrated from Ireland to the States in the 1950s, where Aidan, as well as his sister and three brothers were born.
Artistic blood obviously runs in the family, with his older brother Declan having made a name for himself as cinematographer in films such as Leaving Las Vegas and Vanya On 42nd Street, younger sister Marian working as an actress, and younger brother Paul having recently ventured into the world of writing/directing for their joint family effort This Is My Father in addition to working as an actor. Only one of the five siblings, another younger brother, James, has stayed away from the limelight and is making a living as a landscaper in LA.

Aidan was barely a toddler when the family went back to his parents' hometown of Birr, Co. Offaly in Ireland where he started pre-school, only to return to Illinois about a year and a half later. At the age of 13, Aidan and his family returned to Birr yet again, but Aidan soon left to go to school in Dublin, where he stayed for a year before returning to Rockford, Illinois, Chicago and then back to Dublin. "We got used to living in two different cultures and being able to go back and forth", he once said in an interview. "With Declan, Marian and myself it's always back and forth, Irish-American, American-Irish…". This being caught between two cultures has contributed a fair deal to the feeling of closeness in the Quinn family.

Although a roofer by trade, Aidan discovered his love for acting around 1978 when he was about 19 and living in Dublin. Once the decision was made and it became obvious that work wasn't so easy to come by in Ireland, he returned to Chicago, where he made his stage debut in The Man in 605. Some of his early stage experience includes plays such as Scheherazade and The Irish Hebrew Lesson. Moving on to New York, he made his stage debut there in a production of Fool for Love, followed by roles in A Lie of the Mind as well as the title role in a modern-day Hamlet directed by Robert Falls.

In 1984 he made his cinema debut starring opposite Daryl Hannah in Reckless. His breakthrough however came a year later in the role of Dez alongside Rosanna Arquette and Madonna in Desperately Seeking Susan. He also starred in several television productions, including The Lies of The Twins opposite Isabella Rossellini (a double dose of Aidan - excellent!) and the NBC drama An Early Frost, the latter being the first film addressing the issue of AIDS & HIV. His portrayal of a gay man in this film earned him an Emmy nomination.

Aidan has shown his versatility and talent as an actor by playing a wide range of roles, from heart throb/good guy in films such as Avalon, Desperately Seeking Susan and Benny & Joon, through to gay man in An Early Frost, missionary in At Play In The Fields Of The Lord and one of the world's most wanted terrorists in The Assignment.

Although having starred alongside "big" names such as Anthony Hopkins, Ben Kingsley, Liam Neeson, Donald Sutherland, Johnny Depp, Madeleine Stowe, Sandra Bullock, Brad Pitt, and Robert DeNiro, and in some "big" films such as Legends of The Fall and Mary Shelley's Frankenstein, The Mission and Michael Collins he has managed to keep a fairly low profile. This is not something he's unhappy about, since he likes to keep his private life private, and, after all, he can't exactly complain about lack of work, having worked on 5 films released in 1998 alone, including Practical Magic, and Music of The Heart (which also stars Meryl Streep and Gloria Estefan), as well as his latest project alongside Pierce Brosnan, Evelyn.

Aidan has been married to actress Elizabeth Bracco (whom he met in a New York restaurant in around 1984 and who was with him in Stakeout in 1987, and who also starred in Trees Lounge and Mystery Train as well as being costume designer on In The Soup; she also starred in The Impostors, a film Aidan dropped out of in favour of Music of The Heart) since September 1987 and they have two daughters: Ava Eileen, born around 1989 (who had her acting debut at the tender age of 3 months: she was the baby in the film Avalon!) and Mia, born around 1998. Although their main home is in New Jersey (he purposely keeps well away from Hollywood), they like to retreat to their second home, a 18th century cottage in upstate New York whenever they can. 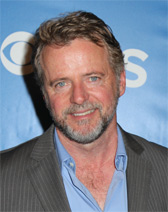