Who is John Wayne?

Marion Mitchell Morrison, known professionally as John Wayne and nicknamed Duke, was an American actor, director, and producer.
Marion Morrison was born in Iowa in 1907, came West with his family in 1914, and pretty soon was being called “Duke” by everyone who knew him, after some local firefighters in Glendale, California, where the family eventually settled, thought it would be fun to give the boy the same nickname as his constant companion, a proud Airedale dog named Duke. Living with his parents, Clyde “Doc” Morrison, a pharmacist, and Mary “Molly” Brown, and alongside his brother Robert, Duke was academically and athletically quite successful at Glendale High School. His exploits there led to a football scholarship at the University of Southern California (USC), where he attended until a bodysurfing injury ended his football dreams, and led him to look for work at local movie studios to support himself once the Great Depression was in full swing.

Duke eventually found a job at the Fox Film Corporation as a member of what they called a swing gang, meaning he was a prop man, moving furniture, material, and equipment around for filmmakers. A few of them felt he was the right build to stand in a few scenes here and there as an extra, starting naturally as a football player in “Brown of Harvard” in 1926 and again in “Drop Kick” in 1927. It wasn’t long before one of Hollywood’s great directors, John Ford, noticed Morrison and gave him a job herding geese on a 1928 film called “Mother Machree.” Eventually, the two of them hit it off and became lifelong friends. But at the time, Morrison tried to learn about filmmaking from Ford, and Ford kept using Morrison as an extra. Eventually, Ford introduced Duke to his colleague, director Raoul Walsh, who gave Morrison his first starring role, as the cowboy Breck Coleman in the 1930 film, “The Big Trail.” During this production, studio executives gave Morrison a new name in the hopes of making him an easier sell to film audiences, and he readily accepted the moniker “John Wayne,” saying it was OK with him if the people paying his salary wanted to spruce up his name.

Throughout the 1930’s, John Wayne diligently and strategically honed his craft while starring in a series of less well-known Westerns features and serials, preferring to spend most of his time with stuntmen and real-life cowboys so that they could teach him the skills necessary to play a realistic cowboy on screen. He developed over this period his signature walk, a fist-fighting style, wardrobe preferences, and performed many of his own stunts. Then, in 1939, John Ford gave him his big break as the Ringo Kid in the classic film, “Stagecoach.” Wayne’s performance made him a star for good, and earned Ford an Academy Award nomination for Best Director.

The 1940’s and ‘50’s saw John Wayne develop into an important figure on the American landscape with a series of starring roles in major Westerns and War pictures. He also toured the world and entertained troops tirelessly for the USO, all while raising a growing family that, by this time, included son Michael, daughter Toni, son Patrick, and daughter Melinda. As the 1960’s and ‘70’s arrived, he added romantic comedies, police dramas, and historical dramas to his portfolio, earned three Academy Award nominations, and finally won the big award in 1969 for his performance as Rooster Cogburn in “True Grit.” His final on-screen performance, as a gunman struck with cancer in 1976’s “The Shootist” is considered among his greatest performances.

Along the way, he survived a 1964 bout with lung cancer that saw him lose a lung and several ribs, and a couple of divorces before remarrying and having three more children—Marisa, Aissa, and Ethan. Later in life, he increasingly spoke out on national issues, and played a central role in helping to get the United States Senate to ratify the Panama Canal Treaties in 1977, shortly before his death. No doubt, he would have kept going if he hadn’t been struck down with stomach cancer in 1979, finally succumbing to the disease that year at the age of 72.

Posthumously, John Wayne was awarded the Congressional Gold Medal and the Presidential Medal of Freedom. But perhaps John Wayne’s greatest legacy was his dying wish, which was that his family and supporters use his name and likeness to help the doctors fight cancer—a wish that led to the creation of the John Wayne Cancer Foundation (JWCF) in 1985. Over the years, JWCF has supported research by funding the creation of the Cancer Institute that bears his name, education programs, awareness programs, and support groups. 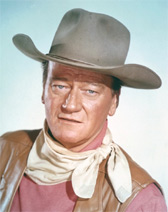