Who is Owen Wilson?

Born in Dallas on November 18th, 1968, Wilson raised enough hell in high school to get expelled from one institution in tenth grade, but he managed to attend college at the University of Texas in Austin and graduate in 1991. Along with his degree, Wilson's Austin years resulted in a budding partnership with a like-minded creative classmate, aspiring filmmaker Wes Anderson. Their first film together, a short about a bookstore heist called Bottle Rocket, played at the 1993 Sundance Film Festival, attracting the attention of producer Polly Platt and writer/director James L. Brooks. With Brooks' support, Wilson and Anderson expanded the short into a feature, indie cult favorite Bottle Rocket (1996). Though it made little impression at the box office,
Anderson and Wilson's distinctly offbeat, wry, and optimistic tale about aspiring criminal Dignan and his best friend Anthony (played by Wilson's brother Luke Wilson) earned ardent fans among cinéastes. Wilson's inspired performance as Dignan, not to mention his blond hair, large grin, and affable drawl, became his Hollywood calling card. That same year, Wilson also began a fertile association with actor/director Ben Stiller, appearing in one memorable scene as a smooth, ill-fated date in Stiller's black comedy The Cable Guy (1996).

Alternating between supporting roles in Hollywood spectacles, collaborations with Anderson and Stiller, and smaller independent projects, Wilson worked steadily for the rest of the 1990s. Though he always seemed to fill the generic slot of Guy Marked for Death, Wilson still managed to bring a reliably laid-back, humorous spark to the bombastic proceedings in Anaconda (1997), Armageddon (1998), and The Haunting (1999). On a more artistically successful front, Wilson's next script with Anderson resulted in the lauded coming-of-age film Rushmore (1998). With its singular cast of characters, distinctive combination of deadpan humor and true emotion, and superb performances by Jason Schwartzman as teen prodigy Max Fischer and Bill Murray as depressed millionaire Blume, Rushmore earned prizes from the critics (if not the Academy) and proved that Bottle Rocket was no fluke. As far as acting, Wilson's ability to suggest complexity beneath a breezy surface earned positive notice for his unsettling performance as a laconic, self-styled Good Samaritan serial killer in indie thriller The Minus Man (1999).

By 2000, Wilson began to take center stage in larger Hollywood projects as well. Though it was another Jackie Chan vehicle, Wilson's hilarious co-starring turn as a surfer dude-tinged outlaw in the chop socky Western Shanghai Noon (2000) nearly stole the movie. Wilson's brief appearance as a Jesus-loving, super rich romantic rival to Ben Stiller's put-upon Greg Focker was a comic highlight of the hit Meet the Parents (2000). Stiller's supermodel farce Zoolander (2001) further sealed Wilson's status as a superlative comic actor. As Zoolander's rival Hansel, Wilson's offbeat timing made him the ultimate bubble-headed mannequin; his catwalk competition with Stiller provided the biggest laughs in a hit-or-miss movie. Even as he flourished in broad Hollywood comedy, Wilson continued his partnership with Wes Anderson, co-writing with Anderson and co-starring (with his brother Luke and Stiller among others) in the unusual family story The Royal Tenenbaums (2001). Branching out into serious roles, Wilson then co-starred with The Royal Tenenbaums patriarch Gene Hackman in the military drama Behind Enemy Lines (2001).

An increasingly prevalent figure in action films following the millennial turnover, Wilson followed Behind Enemy Lines with I Spy (2002) and the Shanghai Noon sequel Shanghai Knights (2003) before appearing opposite Morgan Freeman in the critical and commercial disappointment The Big Bounce and co-starring in the underwhelming big screen adaptation of Starsky & Hutch. He made his third appearance in a Jackie Chan vehicle in the 2004 Disney production Around the World in 80 Days; though poised to be a blockbuster, the mega-budgeted film was one of the biggest flops of the season.

A rebound was in order, and if his supporting turn in the 2004 holiday-season blockbuster sequel Meet the Fockers wasn't enough, Wilson found his greatest leading-man success to date as foil to the bawdy Vince Vaughn in 2005's raunchy, runaway hit The Wedding Crashers. The Wilson-Vaughn pairing challenged the Wilson-Stiller hilarity quotient as a pair of divorce consultants who bide their free time crashing weddings to get laid. The $200-million smash was indeed a tough act to follow, and while 2006's You, Me and Dupree - a thematic reprise of his Wedding Crashers role in which he plays an irritating houseguest who refuses to vacate - was something of a letdown, Wilson more than made up for it that same year with a leading voice role in Pixar's Cars and a supporting turn in Stiller's special-effects comedy A Night at the Museum.

For the next couple of years, Wilson continued to stick with what worked - collaborations with Anderson (The Darjeeling Limited (2007), Fantastic Mr. Fox (2009) and The Grand Budapest Hotel (2014)) and sequels in his hit franchises (Night at the Museum: Battle for the Smithsonian (2009), Little Fockers (2010) and Cars 2 (2011)). He also starred in Woody Allen's Mightnight in Paris (2011), earning a Golden Globe nomination for Best Actor in a Musical or Comedy.

Romantically linked, by turns, with a pre-Ashton Demi Moore, rocker Sheryl Crow, and actress Kate Hudson, Wilson, with his shaggy blond mane, blue eyes, and (as one magazine cited humorously in its front cover headline) "unusual nose," also found himself the unlikely forebear of a new wave of Hollywood sex symbols. 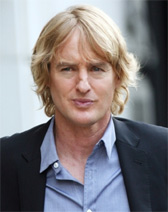