Who is Isaac Newton?

English natural philosopher
Generally regarded as the most original and influential theorist in the history of science. In addition to his invention of the infinitesimal calculus and a new theory of light and color, Newton transformed the structure of physical science with his three laws of motion and the law of universal gravitation. As the keystone of the scientific revolution of the 17th century, Newton's work combined the contributions of Copernicus, Kepler, Galileo, Descartes, and others into a new and powerful synthesis. Three centuries later the resulting structure - classical mechanics - continues to be a useful but no less elegant monument to his genius.

Isaac Newton was born prematurely on Christmas day 1642 (4 January 1643, New Style) in Woolsthorpe, a hamlet near Grantham in Lincolnshire. The posthumous son of an illiterate yeoman (also named Isaac), the fatherless infant was small enough at birth to fit 'into a quartpot.' When he was barely three years old Newton's mother, Hanna (Ayscough), placed her first born with his grandmother in order to remarry and raise a second family with Barnabas Smith, a wealthy rector from nearby North Witham. Much has been made of Newton's posthumous birth, his prolonged separation from his mother, and his unrivaled hatred of his stepfather. Until Hanna returned to Woolsthorpe in 1653 after the death of her second husband, Newton was denied his mother's attention, a possible clue to his complex character. Newton's childhood was anything but happy, and throughout his life he verged on emotional collapse, occasionally falling into violent and vindictive attacks against friend and foe alike.

With his mother's return to Woolsthorpe in 1653, Newton was taken from school to fulfill his birthright as a farmer. Happily, he failed in this calling, and returned to King's School at Grantham to prepare for entrance to Trinity College, Cambridge. Numerous anecdotes survive from this period about Newton's absent-mindedness as a fledging farmer and his lackluster performance as a student. But the turning point in Newton's life came in June 1661 when he left Woolsthorpe for Cambridge University. Here Newton entered a new world, one he could eventually call his own.

Although Cambridge was an outstanding center of learning, the spirit of the scientific revolution had yet to penetrate its ancient and somewhat ossified curriculum. Little is known of Newton's formal studies as an undergraduate, but he likely received large doses of Aristotle as well as other classical authors. And by all appearances his academic performance was undistinguished. In 1664 Isaac Barrow, Lucasian Professor of Mathematics at Cambridge, examined Newton's understanding of Euclid and found it sorely lacking. We now know that during his undergraduate years Newton was deeply engrossed in private study, that he privately mastered the works of René Descartes, Pierre Gassendi, Thomas Hobbes, and other major figures of the scientific revolution. A series of extant notebooks shows that by 1664 Newton had begun to master Descartes' Géométrie and other forms of mathematics far in advance of Euclid's Elements. Barrow, himself a gifted mathematician, had yet to appreciate Newton's genius.

In 1665 Newton took his bachelor's degree at Cambridge without honors or distinction. Since the university was closed for the next two years because of plague, Newton returned to Woolsthorpe in midyear. There, in the following 18 months, he made a series of original contributions to science. As he later recalled, 'All this was in the two plague years of 1665 and 1666, for in those days I was in my prime of age for invention, and minded mathematics and philosophy more than at any time since.' In mathematics Newton conceived his 'method of fluxions' (infinitesimal calculus), laid the foundations for his theory of light and color, and achieved significant insight into the problem of planetary motion, insights that eventually led to the publication of his Principia (1687).

In April 1667, Newton returned to Cambridge and, against stiff odds, was elected a minor fellow at Trinity. Success followed good fortune. In the next year he became a senior fellow upon taking his master of arts degree, and in 1669, before he had reached his 27th birthday, he succeeded Isaac Barrow as Lucasian Professor of Mathematics. The duties of this appointment offered Newton the opportunity to organize the results of his earlier optical researches, and in 1672, shortly after his election to the Royal Society, he communicated his first public paper, a brilliant but no less controversial study on the nature of color.

In the first of a series of bitter disputes, Newton locked horns with the society's celebrated curator of experiments, the bright but brittle Robert Hooke. The ensuing controversy, which continued until 1678, established a pattern in Newton's behavior. After an initial skirmish, he quietly retreated. Nonetheless, in 1675 Newton ventured another yet another paper, which again drew lightning, this time charged with claims that he had plagiarized from Hooke. The charges were entirely ungrounded. Twice burned, Newton withdrew.

In 1678, Newton suffered a serious emotional breakdown, and in the following year his mother died. Newton's response was to cut off contact with others and engross himself in alchemical research. These studies, once an embarrassment to Newton scholars, were not misguided musings but rigorous investigations into the hidden forces of nature. Newton's alchemical studies opened theoretical avenues not found in the mechanical philosophy, the world view that sustained his early work. While the mechanical philosophy reduced all phenomena to the impact of matter in motion, the alchemical tradition upheld the possibility of attraction and repulsion at the particulate level. Newton's later insights in celestial mechanics can be traced in part to his alchemical interests. By combining action-at-a-distance and mathematics, Newton transformed the mechanical philosophy by adding a mysterious but no less measurable quantity, gravitational force.

In 1666, as tradition has it, Newton observed the fall of an apple in his garden at Woolsthorpe, later recalling, 'In the same year I began to think of gravity extending to the orb of the Moon.' Newton's memory was not accurate. In fact, all evidence suggests that the concept of universal gravitation did not spring full-blown from Newton's head in 1666 but was nearly 20 years in gestation. Ironically, Robert Hooke helped give it life. In November 1679, Hooke initiated an exchange of letters that bore on the question of planetary motion. Although Newton hastily broke off the correspondence, Hooke's letters provided a conceptual link between central attraction and a force falling off with the square of distance. Sometime in early 1680, Newton appears to have quietly drawn his own conclusions.

Meanwhile, in the coffeehouses of London, Hooke, Edmund Halley, and Christopher Wren struggled unsuccessfully with the problem of planetary motion. Finally, in August 1684, Halley paid a legendary visit to Newton in Cambridge, hoping for an answer to his riddle: What type of curve does a planet describe in its orbit around the sun, assuming an inverse square law of attraction? When Halley posed the question, Newton's ready response was 'an ellipse.' When asked how he knew it was an ellipse Newton replied that he had already calculated it. Although Newton had privately answered one of the riddles of the universe--and he alone possessed the mathematical ability to do so--he had characteristically misplaced the calculation. After further discussion he promised to send Halley a fresh calculation forthwith. In partial fulfillment of his promise Newton produced his De Motu of 1684. From that seed, after nearly two years of intense labor, the Philosophiae Naturalis Principia Mathematica appeared. Arguably, it is the most important book published in the history of science. But if the Principia was Newton's brainchild, Hooke and Halley were nothing less than midwives.

Although the Principia was well received, its future was cast in doubt before it appeared. Here again Hooke was center stage, this time claiming (not without justification) that his letters of 1679-1680 earned him a role in Newton's discovery. But to no effect. Newton was so furious with Hooke that he threatened to suppress Book III of the Principia altogether, finally denouncing science as 'an impertinently litigious lady.' Newton calmed down and finally consented to publication. But instead of acknowledging Hooke's contribution Newton systematically deleted every possible mention of Hooke's name. Newton's hatred for Hooke was consumptive. Indeed, Newton later withheld publication of his Opticks (1704) and virtually withdrew from the Royal Society until Hooke's death in 1703.

After publishing the Principia, Newton became more involved in public affairs. In 1689 he was elected to represent Cambridge in Parliament, and during his stay in London he became acquainted with John Locke, the famous philosopher, and Nicolas Fatio de Duillier, a brilliant young mathematician who became an intimate friend. In 1693, however, Newton suffered a severe nervous disorder, not unlike his breakdown of 1677-1678. The cause is open to interpretation: overwork; the stress of controversy; the unexplained loss of friendship with Fatio; or perhaps chronic mercury poisoning, the result of nearly three decades of alchemical research. Each factor may have played a role. We only know Locke and Samuel Pepys received strange and seemingly deranged letters that prompted concern for Newton's 'discomposure in head, or mind, or both.' Whatever the cause, shortly after his recovery Newton sought a new position in London. In 1696, with the help of Charles Montague, a fellow of Trinity and later earl of Halifax, Newton was appointed Warden and then Master of the Mint. His new position proved 'most proper,' and he left Cambridge for London without regret.

During his London years Newton enjoyed power and worldly success. His position at the Mint assured a comfortable social and economic status, and he was an active and able administrator. After the death of Hooke in 1703, Newton was elected president of the Royal Society and was annually reelected until his death. In 1704 he published his second major work, the Opticks, based largely on work completed decades before. He was knighted in 1705.

Although his creative years had passed, Newton continued to exercise a profound influence on the development of science. In effect, the Royal Society was Newton's instrument, and he played it to his personal advantage. His tenure as president has been described as tyrannical and autocratic, and his control over the lives and careers of younger disciples was all but absolute. Newton could not abide contradiction or controversy - his quarrels with Hooke provide singular examples. But in later disputes, as president of the Royal Society, Newton marshaled all the forces at his command. For example, he published Flamsteed's astronomical observations - the labor of a lifetime - without the author's permission; and in his priority dispute with Leibniz concerning the calculus, Newton enlisted younger men to fight his war of words, while behind the lines he secretly directed charge and countercharge. In the end, the actions of the Society were little more than extensions of Newton's will, and until his death he dominated the landscape of science without rival. He died in London on March 20, 1727 (March 31, New Style).

All videos of Isaac Newton 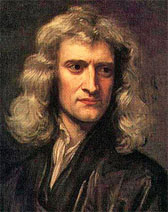