Who is Stanley Kubrick?

Stanley Kubrick was born July 26th, 1928, in The Bronx, New York. The son of a successful Manhattan physician father and a Rumanian born mother (his family name is most often pronounced "KOOB-rik"). His sister Barbara Mary was born in 1934.
Kubrick by his own admission was "a lonely child," and a "misfit in high school." His parents had wanted him to become a doctor but he graduated with a 70% average which fell short of the marks needed to get into medical college. Kubrick grew up on the Grand Concourse and 196th Street in the Bronx, attending Taft High School. His love of film began at an early age he would go to Loew's Paradise and R.K.O. Fordham twice a week to view the double features. He would later say of this experience: "One of the important things about seeing run-of-the-mill Hollywood films eight times a week was that many of them were so bad [...] Without even beginning to understand what the problems of making films were, I was taken with the impression that I could not do a film any worse than the ones I was seeing. I also felt I could, in fact, do them a lot better."

Kubrick said that everything good that happened in his life was by the sheerest stroke of luck. At the age of 13, his father bought him a stills camera and he soon became fascinated by photography. He soon became an excellent amateur photographer, selling his pictures to magazines whilst still at high school. Later when he was looking for a job, Helen O'Brien, a picture editor at "Look" magazine, whom Kubrick had befriended, asked him if he would like to be a junior photographer for $50 a week. After 6 months Kubrick made it to staff photographer. He travelled around the country and abroad (including Europe) and learned "a lot about people and things." In 1951 he made a documentary about the boxer Walter Cartier "Day of the Fight," which he sold to RKO for a small profit which started him on his movie making career.

Kubrick was married three times: to Toba Metz 1948-54, Ruth Sobtka 1955-1957 and Christiane Harlan 1958-99. Christiane, under the stage name of Susanne Christian, played the German peasant girl who sings for the soldiers at the end of Paths of Glory. She said, they were both in "grotesquely unhappy marriages and both in the throes of divorce" at the time of their meeting. The Kubrick's had three daughters; Katharina (Christiane's child from her previous marriage) Anya and Vivian.

After leaving the US in the mid-sixties, Kubrick spent the remainder of his life with Christiane and their children in Abbots Mead and later Childwick Bury, both residences located on the outskirts of North London near the town of St. Albans. "It's very pleasant, very peaceful, very civilised, here," Mr. Kubrick said in an interview.

Mr. Kubrick died at home in the Spring of 1999 of a heart attack, and is survived by his wife and daughters. 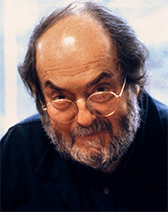