Who is Kim Kardashian?

Kim was born in Los Angeles, California, to Robert Kardashian and Kris Jenner (nee Houghton). Robert Kardashian was a top lawyer, best known for defending O.J. Simpson when Simpson was charged with the double murder of his wife and her friend. Robert died on 30.9.2003.
Kim's mother had divorced Robert in 1989 and married Bruce Jenner, a former Olympian. Kim also has two sisters, Kourtney and Khloe, as well as a brother, Robert. In addition to this, she has two stepbrothers; Burton and Brandon Jenner, a step-sister (reality TV star Brody Jenner) and two half-sisters, Kendall and Kylie Jenner. Kim attended an all-girl's Catholic school in Los Angeles and helped out at her father's music marketing firm, Movie Tunes.

Having been lifelong friends with the heiress Paris Hilton, Kim Kardashian was introduced to the socialite scene in the early 2000's. Kardashian herself first encountered a degree of notoriety when a tape of her having sex with the rapper Ray J became available.

Far from damaging her prospects, Kardashian built a life in the spotlight around the incident. She began with a reality TV series, entitled Keeping Up With the Kardashians, which featured her and her family and aired on the E! channel in the US.

She went on to act in 'Beyond the Break' and Disaster Movie though never quite forged an acting career for herself. She has had more success presenting TV shows such as Wrestlemania XXIV and serving as a judge on America's Next Top Model. She was also selected as a contestant on the popular Dancing with the Stars.

Kim Kardashian owns a clothing boutique with her sister, entitled D-A-S-H, along with her sisters Kourtney and Khloe. She has also launched a number of beauty products, such as the charitable LipFusion lipgloss and the Kardashian Glamour Tan.

Deciding to step behind the camera for a change, Kim Kardashian produced the reality show The Spin Crowd, which focuses on her friend's PR company, Command PR.

She also turned her hand to music and the video for her track 'Jam (Turn It Up)' was directed by Hype Williams, featuring a cameo from Kanye West.

Kim Kardashian married the music producer Damon Thomas in 2000. Their relationship was short-lived and the pair divorced in 2004. She went on to date a number of high-profile men, including the model Gabriel Aubry, Miami Dolphins player Reggie Bush and the Dallas Cowboys player Miles Austin.

In October 2010, she started dating Kris Humphries, a basketball player for the New Jersey Nets. They were engaged in May 2011 and married in August 2011. The marriage preparations and ceremony were subjects of a TV show that aired on E! in October 2011. After just 72 days of marriage, Kim Kardashian filed for divorce. Humphries has accused Kim Kardashian of fraud and has requested that a judge issue an annulment rather than the requested divorce. 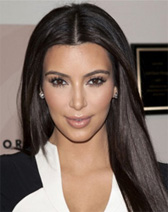