Who is Antonio Banderas?

José Antonio Domínquez Banderas was born on the 8th October 1960 in Benalmádena (Málaga province). After school, Antonio went on to study drama. Then, aged 19, he went to Madrid to seek his fortune with just 15.000 pesetas in his pocket.
By luck, he met the acclaimed Spanish director Pedro Almodovar and had his first film break, appearing in Laberinto de Pasiones alongside Imanol Arias.

Banderas soon became a regular in Almodóvar's films, including Requiem (1985), where he played a Spanish farmer, La Corte de Faraón and Caso Cerrado (1986) when he won the Fotogramas prize for the Best Actor. In 1985, he appeared in another Almodóvar film Matador, with was similarly successful.

His collaboration with the director continued with the following films: La Ley Del Deseo (1986) and Mujeres al Borde de un Ataque de Nervios (1988) which was nominated for an Oscar in the foreign film category.

In 1990, Banderas worked with Almodóvar again in the film Átame. But his passport to universal fame came to him via Madonna, for he was included in her documentary "In bed with Madonna" whilst staying in Madrid in 1990.

In January 1991 the actor moved to Los Angeles to film the Kings of Mambo, directed by Arnold Lincher and based on the book by Pulitzer prize author Oscar Hijuelos. This was followed in 1992 by 'Philadelphia' where Banderas played the homosexual lover of Tom Hanks.

1993 saw him starring with British actor Jeremy Irons and ¨Winona Ryder in The House of Spirits based on the novel by Isabel Allende. He was also in Of Love and Shadows another film based on a novel by the same author, which was shot in Argentina.

Two years later he was to star in the film Two Much, which was to have a lasting impact on his personal life. His co-star was Melanie Griffith whom he subsequently married, having divorced his Spanish wife, Ana Leza.

In 1998 Banderas starred in Steven Spielberg´s film The Mask of Zorro alongside Anthony Hopkins and Catherine Zeta-Jones and the following year he directed his first film Crazy in Alabama starring Melanie Griffith.

Antonio Banderas directed a film based on Gamel Woolsey's book Death's Other Kingdom (Málaga en llamas) which deals with the author's life during the first months of the Spanish Civil War in the 1930's with the late writer Gerald Brenan (South from Granada).

As for his sultry good looks, according to his father, Banderas' success with women comes from way back, to his first years of adolescence. It's true that many Hollywood stars have fallen at his feet, Madonna, Sharon Stone...to name but two.

Antonio is a regular visitor to Marbella where he has a house in Los Monteros. He and ex wife Melanie Griffiths have a daughter born in Marbella in 1999. 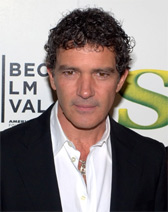