Who is Samuel Pepys?

Samuel Pepys was born on February 23rd 1633 in Salisbury Court off Fleet Street. His father, John, was a tailor, his mother Margaret Kite was sister of a Whitechapel butcher and Samuel was fifth in a line of eleven children.
The accepted pronunciation today of his curiously spelled name is PEEPS. Sam definitely pronounced his name PEEPS as do the descendents of his sister Paulina. However other branches of the family pronounce it PEPPIS.

The Pepyses were country people who, from the 13th century onwards had held land around Cottenham in Cambridgeshire, including the manor of Impington. In 1618 Paulina Pepys married a brother of the 1st Earl of Manchester, Sir Sydney Montagu, who in 1627 acquired the house and estate of Hinchingbrooke, near Huntingdon.

Robert Pepys of Brampton, served in the household of his relatives, the Montagus of Hinchingbrooke. Samuel was sent to Huntingdonshire in 1642 to live with his uncle, because of his health and fears of The Plague (from which several of his brothers died).The house where he lived still stands between Brampton and Hinchingbrooke (see left).

Samuel attended the Grammar School at Huntingdon, whose ex-pupils included not only Oliver Cromwell but also Edward Montagu, the young squire of Hinchingbrooke. Edward, 8 years older than Samuel, inherited the Hinchingbrooke estate from his father, Sir Sydney, in 1644.

His future employer, Edward Montagu, a commander of the parliamentary army, fell out with the Parliamentary side over the execution and left politics for several years, re-emerging as a supporter of the King. Pepys meanwhile attended Magdalene College Cambridge, which today houses his Diary.

He took his bachelor's degree in 1654 and entered the service of Edward Montagu as his secretary and agent in London. By 1655 Pepys had married the fifteen year old daughter of a Huguenot exile, Elizabeth St Michel.

As Mountagu's responsibilities grew, so did Pepys', looking after the Montagu estate and business in London, during absences abroad on naval service and visiting Hinchingbrooke.

In March 1658 he underwent a dangerous operation for the removal of a bladder stone - the recovery from which he celebrated with a banquet for years afterwards.

The late 1650's were turbulent times in England, Oliver Cromwell having died in September 1658 and there being no real successor apart from his son Richard, who was no politician. There was therefore a great deal for Pepys to write about and this was doubtless one of the reasons for beginning his diary.

Pepys' vanity is usually given as the reason for his need to write a diary was . Being proud of his achievements, writing down events involving him gave him great pleasure; re-reading even more so.

His knowledge of shorthand, his political connections through Montagu (now Earl of Sandwich and First Lord of the Admiralty, having brought the King back from exile), and his subsequent government posts as one of the principal officers of the navy administration, gave him power and moderate wealth.

His love of order and efficiency made him a man of some importance and he proudly and successfully addressed the Commons on naval matters.His speech to the Commons on March 5th 1668. pleased him enormously.

By the time the diary ended in the spring of 1669, Pepys' professional success was well established. He was the acknowledged "right hand of the Navy"; master of an elegant household; owner of a coach and a pair of black horses; a man rich enough to retire and live "with comfort, if not in abundance."

He was also recovering from his wife's discovery in October 1668 of his affair with her companion, Deborah Willet (one of a series of dalliances with a variety of women), and was suffering so much from eye strain that he thought he was going blind. In November 1669 his wife Elizabeth died from a fever.

Because his Diary finishes in May 1669 this is the last we read of him in detail, however his life had only reached half way and much of his career lay ahead.

He took on many further adminstrative and advisory roles, became a member of Parliament (sitting for Castle Rising, Norfolk, 1673-9 and for Harwich in 1679 and 1685-7), serving as Master of Trinity House, gathering a collection of books and manuscripts, became President of the Royal Society in 1684 and had learned friends in many disciplines.

In 1679 he was forced to resign from the Admiralty and sent to the Tower on a charge of selling naval secrets to the French. The charge was subsequently dropped.

In 1685 Charles II died and was succeeded by the Duke of York as James II. Pepys helped to carry the canopy at the Coronation. He was again arrested, in 1690, on suspicion of Jacobite tendencies. Again the charges were dropped, although he was clearly more allied to James II, whom he had worked with and respected when he was at the admiralty, than the incoming William of Orange.

In 1701 he was in failing health and moved in with the faithful Will Hewer in Clapham. He died in Clapham on May 26th 1703 and is buried at St Olave's. 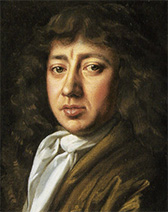