Who is Martina Stoessel?

Martina Stoessel (born March 21, 1997) is an Argentine teen actress, dancer, singer, and model, who gained popularity for her debut role as Violetta Castillo on the Disney Channel original series Violetta.
Stoessel was born in Buenos Aires, Argentina the daughter of producer and director Alejandro Stoessel and Mariana Muzlera. She has a brother who is a year older named Francisco. She began her artistic training at a young age studying singing, piano, musical comedy, musical theater and dance.

In 2007, she starred in the first season of the telenovela Argentine youth Patito Feo in the role of Martina, one of the assistants of Fito Bernardi, and also starred Anna as a child, a friend of Leandro met in a forest, in flashbacks, in the same series.

In 2011, she participated in the Spanish version of the song Shannon Saunders′ "The Glow", called "Tu Resplandor", contained in the album recording Disney Princess: Fairy Tale Songs. She also sings this version for the final event of the Disney Channel Latin America, Celebratón, on 31 December 2011. The song was later included in the compilation relating to the show and published in March of the following year.

In 2012, Stoessel obtained the title role in the series Violetta, co-production between Disney Channel Latin America, Europe, Middle East and Africa, where she plays the character of Violetta Castillo. Stoessel sings the song forerunner of the series published on 5 April 2012 and entitled En mi mundo, the Italian version "Nel mio mondo" and the English version "In My Own World". For this role she won an award for "Female Newcomer" in the 2012 edition of the Kids' Choice Awards Argentina and was also nominated for the U.S. version, the Nickelodeon Kids' Choice Awards, in the "Favorite Latin Artist" category. 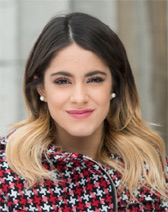