Who is James Buchanan?

Buchanan came to the presidency after a distinguished public career: 10 years as a U.S. representative and another 10 as a senator, ambassadorships to both Russia and Great Britain, and service as James K. Polk's secretary of state.

In the 1850s, the question of slavery divided the United States. Hopes ran high that the new President, "Old Buck," might be the man to avert national crisis. He failed entirely. During his administration, the Union broke apart, and when he left office, civil war threatened.

James Buchanan was the son of Irish immigrants who had made a successful life for themselves as merchants in rural Pennsylvania. The Buchanans could afford to send James to good schools, and after graduating with honors from Dickinson College, James Buchanan studied law. His legal and political careers moved forward together. Becoming a successful attorney, he advanced from state legislator to national figure, including membership in both houses of Congress, ambassadorships, and a cabinet post. The ambitious Buchanan had his sights on the presidency for many years before he actually attained the office. He tried for the White House in 1844, 1848, and 1852 before finally achieving his goal in 1856.

By 1856, the debates over slavery had reached an unprecedented emotional intensity, with abolitionists and proslavery forces alike openly advocating violence and at times resorting to it. A number of abolitionists had been murdered in Kansas, and a radical abolitionist named John Brown had, in retaliation, massacred five settlers loosely affiliated with the proslavery party. Southerners were enraged while many in the North lauded Brown as a hero. In this environment, Buchanan asserted that slavery should be a matter for individual states and territories to decide for themselves. This approach gained him Southern support. His opponent, Senator John C. Fremont, the first Republican presidential candidate, argued that the federal government should prevent slavery from spreading into the new western territories. Shortly before the campaign, Buchanan expressed his fears about the task ahead: "Before many years the abolitionists will bring war upon this land," he said. "It may come during the next presidential term." Buchanan won the election, and many hoped that his experience would help the nation avert war.

Two days after Buchanan's inauguration, the Supreme Court announced its decision in the Dred Scott case. Influenced by the new President, who was sympathetic to Southern interests, the Supreme Court ruled that because slaves—and even former slaves—were not citizens, they had no right to sue for their freedom in a U.S. court of law. Furthermore, the Court declared unconstitutional the Missouri Compromise of 1820, which banned slavery in the portion of the Louisiana Purchase above 36 degrees 30 minutes north latitude. Republicans denounced the decision and vowed to repudiate it. America had become a nation with a sharply divided political system: the Republicans, exclusively Northern and antislavery, and the Democrats, dominantly Southerners and their Northern allies who defended slavery and states' rights.

Eager to retain the support of Southern Democrats and believing early statehood for Kansas would defuse the explosive territorial problem, Buchanan endorsed a proslavery constitution for Kansas. His fellow Democrat, Senator Stephen A. Douglas of Illinois, challenged this endorsement and instead demanded a legitimate popular vote in Kansas. These Kansas troubles, especially the break with Douglas, divided the Democratic Party and weakened Buchanan. Meanwhile, in 1859, John Brown seized the Southern town of Harpers Ferry in Virginia in a futile attempt to spark an uprising of slaves. Although Brown was captured and hanged, his action drove another wedge between North and South.

In 1860, the rift between James Buchanan and Stephen Douglas doomed the political aspirations of both. Under the strain of internal pressure and sectional tension, the Democratic Party finally snapped in two, allowing an unknown railroad lawyer from an upstart party—the Republican Abraham Lincoln—to win the White House. The election of a Northerner clearly opposed to the extension of slavery outside existing Southern states frightened the South.

Six weeks after Lincoln's election, South Carolina left the Union, and within another six weeks, six other states followed. Maintaining that he lacked power, the lame-duck Buchanan took no action to stop secession, which only emboldened the new Confederacy and gave seceding states time to set up a government. Buchanan seemed eager to get out of the White House before the real disaster ensued. He vanished from public life and retreated to his home, seeing only close friends until his death in 1868.

All videos of James Buchanan 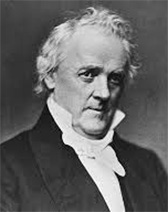