Who is Bob Ross?

Was an American painter, art instructor, and television host. He was the creator and host of The Joy of Painting, an instructional television program that aired from 1983 to 1994 on PBS in the United States, and also aired in Canada, Latin America, and Europe. Ross went from being a public television personality in the 1980s and 1990s to being an Internet celebrity in the 21st century, becoming popular with fans on YouTube and many other websites after his death.

Bob Ross, television's famous painting instructor, was born Robert Norman Ross in Daytona, Florida, on October 29, 1942. Ross was born in Daytona Beach, Florida, to Jack and Ollie Ross (a Cherokee Indian carpenter and a waitress, respectively), and raised in Orlando, Florida. As a child, Ross entertained himself by caring for injured animals, purportedly including an armadillo, snake, and alligator. One of these animals, a squirrel named Peapod , was featured most prominently in a few episodes of his show. Another squirrel, one with epilepsy Bob called "Squirrely Wirrelly Brown" (which was given 6 months to live by a Vet but Bob talked about her 4 to 5 years after getting her) was also on the show less frequently (she was usually kept at home in Ross' basement in a big cage next to where she'd watch him paint). He had a half-brother, Jim, whom he mentioned in passing on his show. Ross dropped out of high school in the 9th grade to work as a carpenter with his father, Jack Ross, when he lost part of his left index finger. This, however, did not affect the way he held his palette while painting.

As he finished his twenty-ninth Public Television series of The Joy of Painting, Bob Ross couldn't help but feel that he was dreaming. The incredible success of the art series has made Bob so familiar to so many viewers, he was often overwhelmed by the warmth he felt from people around the country. "I get so many letters from folks telling me that I'm like a member of their family; it's a fantastic feeling." And it's no wonder. In a time when people hear so much "you can't do this" or "you don't qualify for that" in their daily lives, Bob stood up to say that with enough pure desire and ability to dream, anyone can paint beautiful dreams. This kind of confidence and encouragement that Bob Ross provided to his audience had given him a special place in the hearts of new artists as well as seasoned artists everywhere.

Bob's gentle and motivating kind of approach to teaching the wet-on-wet painting technique was not just a "happy accident" however. Ever since he first appeared on Public Television with his JOY OF PAINTING series in 1983, he had made a commitment to himself and a promise to his viewers to never lose sight of his goal: to provide the best, the possible, and to do it in the warm, "family-like" style which had made it so popular. "I made sure that with each and every show, I have made close, personal contact with my viewers," said Bob.

Beginning his 20-year career with the Air Force at the age of eighteen, Bob held fast to his love of painting. No matter how rigorous his Air Force duties became, he devoted his time to studying privately with some of the country's top art instructors, as well as attending art classes at several colleges and universities. In 1981 Bob Ross officially retired from the Air Force and immediately began to focus all of his energies into painting. As with any career change, the decision to devote his full time to painting was a difficult one. "But, I knew that I could do anything I dreamed possible," says Bob.

He had been able to "paint beautiful pieces of dreams" for literally millions of Public Television watchers, while teaching them how to paint their very own dreams. Additionally, he had worked hard to provide the best instructional aids such as video tapes and books to encourage interest in painting. He had also trained a team of Certified Instructors who tour the entire country teaching his method of painting.

It is easy to see how his dedication to an idea has affected so many. We hope that, for many years to come, his warmth and tender spirit will continue to touch the hearts of the many people around the country who can truly be called "friend". 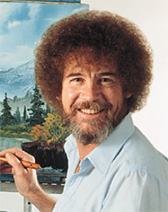